We at Mayday Garage and Car Shop GLOW had an amazing weekend at StanceNation Texas in Dallas, as we officially debuted the CSG x MG S2K AP2 LED taillights for the first time to the general public. We had quite the reaction as Tom displayed the lights on what would be the Best of Show at StanceNation. We listened to everyone’s questions, concerns and critiques. The lights you see on Tom’s car are only prototypes and we can safely say that the new finalized product will be a shade lighter with the smoking process as many have requested the lights not be tinted as dark. Also, the lights will go through one more testing phase in Japan after it makes its rounds to our brothers in Canada at Circuit Garage, the official Car Shop GLOW dealers for Canada. The lights are currently in transition to be shown off on the Circuit Garage S2K Demo car, and with Stephan’s AP2, it should complete the two different types of cars we expect to see the lights on, high end Japanese circuit cars (we have a very famous one we expect to show off the lights in Japan) and the super elite show/street cars here in the USA. 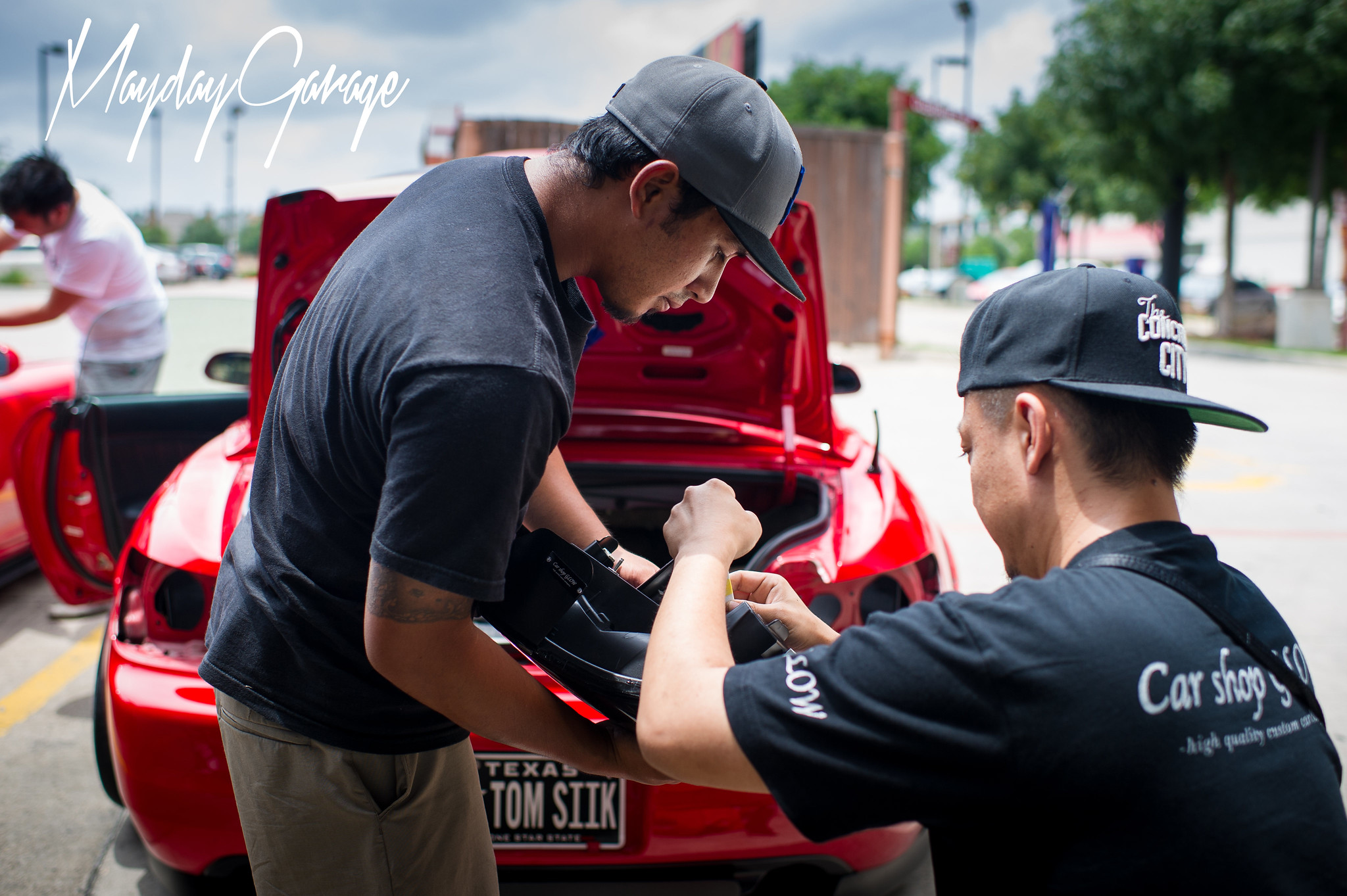 Again, let me emphasize the fact that these lights are not for everyone. We are pricing these lights at $1799 USD, and this is the absolute lowest we could go on the lights. Keep in mind that our complete 3 piece FD3S lights are $1399 USD, and that these lights are different in that we had to source brand new in box OEM Honda Japan AP2 tail lights due to the scarcity of the lights in the Japanese used market. Each tail light is hand made by Ken at Car Shop GLOW in Japan and are tested individually before shipping to us here in the USA. The lights, just like the FD RX-7 lights, will have a 6 month warranty which covers any manufacturer defects and will be facilitated by either us or Circuit Garage in Canada. 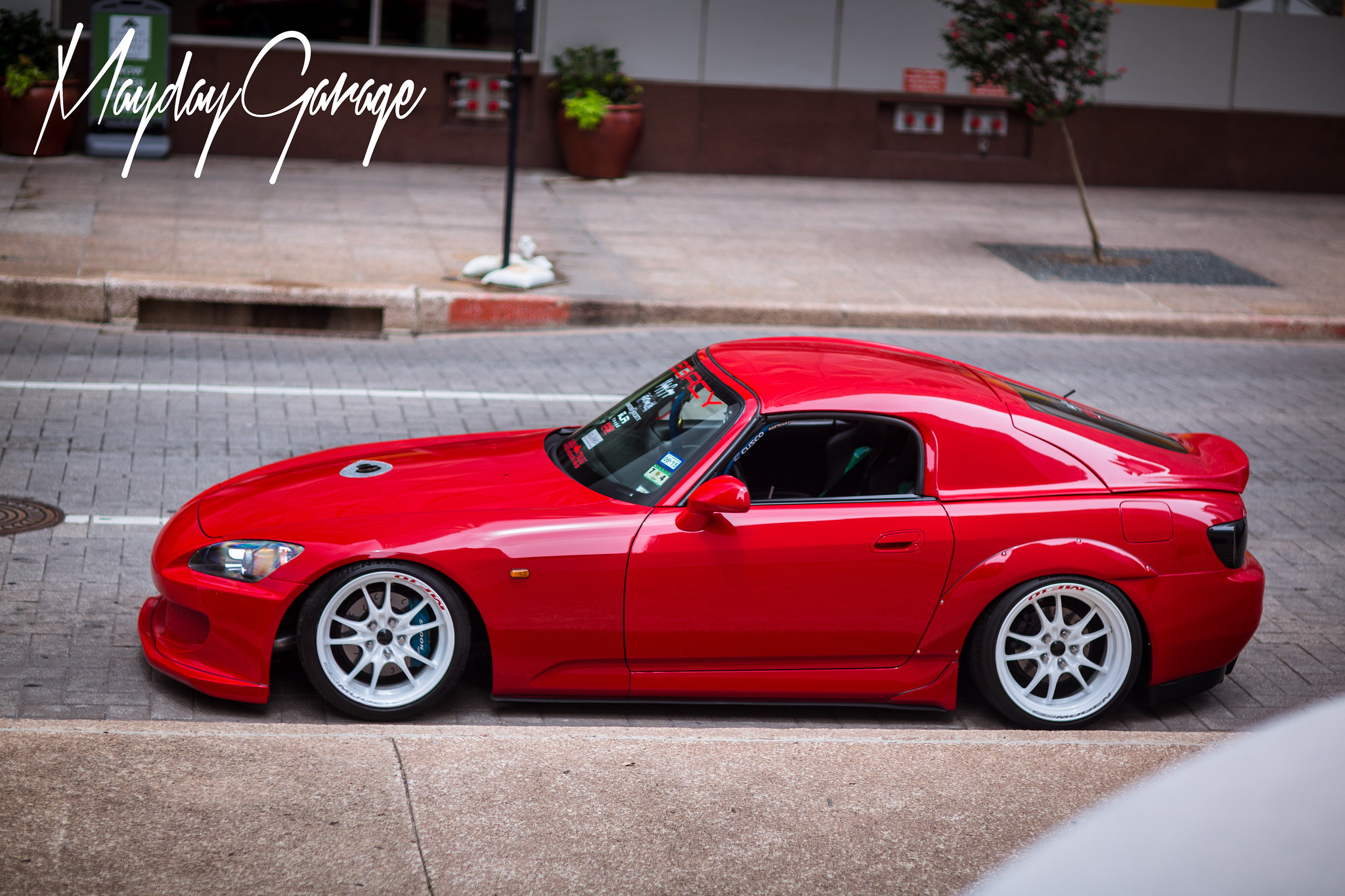 The lights are not for everyone, and we do not expect to sell many. We are simply providing a product that does not yet exist in the market. Many will take a different route due to the price, and there are many ways to go, and we encourage everyone to try out whatever works for your own car and budget, but for the few that want to have a cool light to add that finishing touch to the rear of your S2000, and appreciate a quality part, we have what you’ve been looking for. 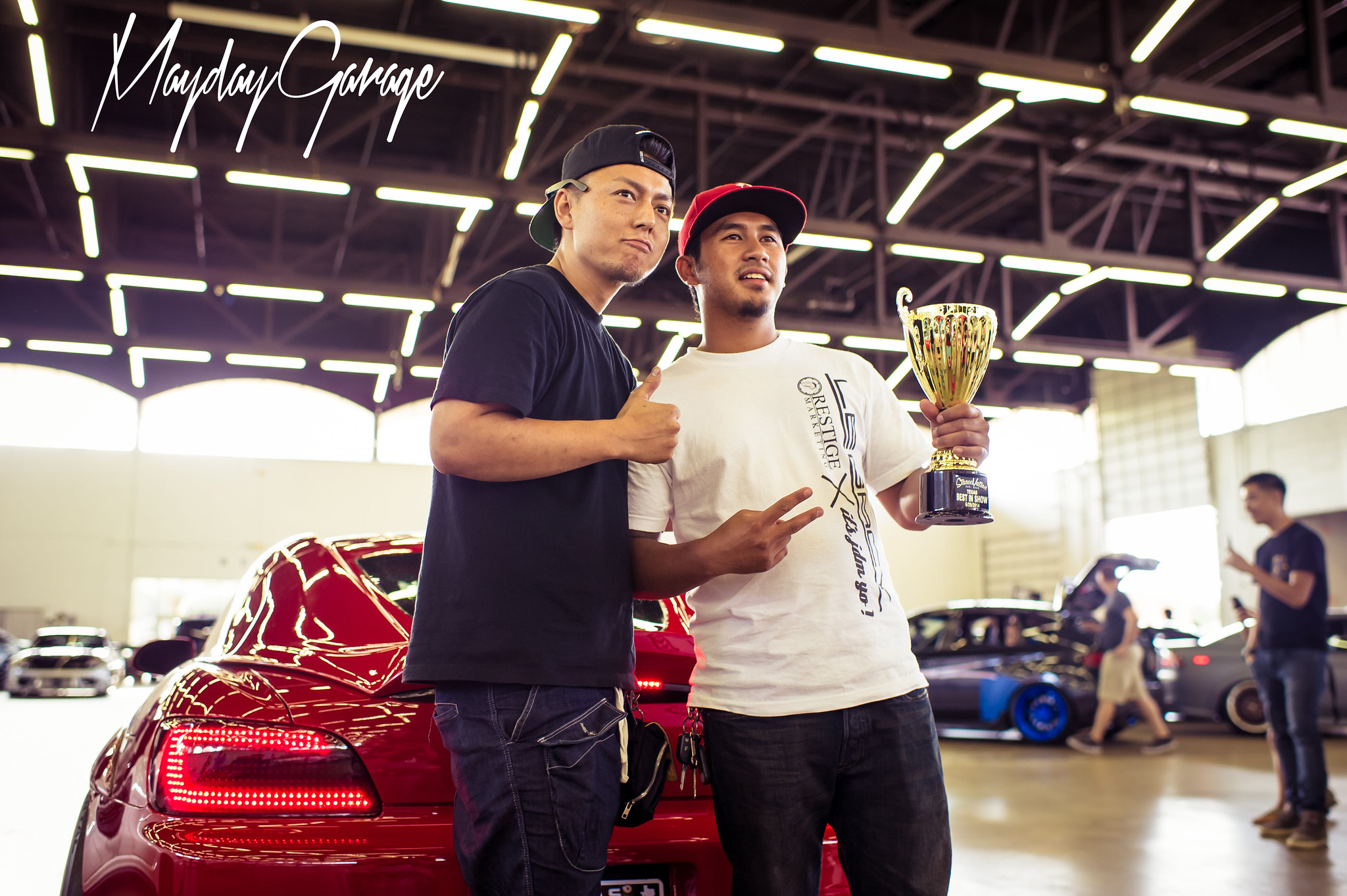 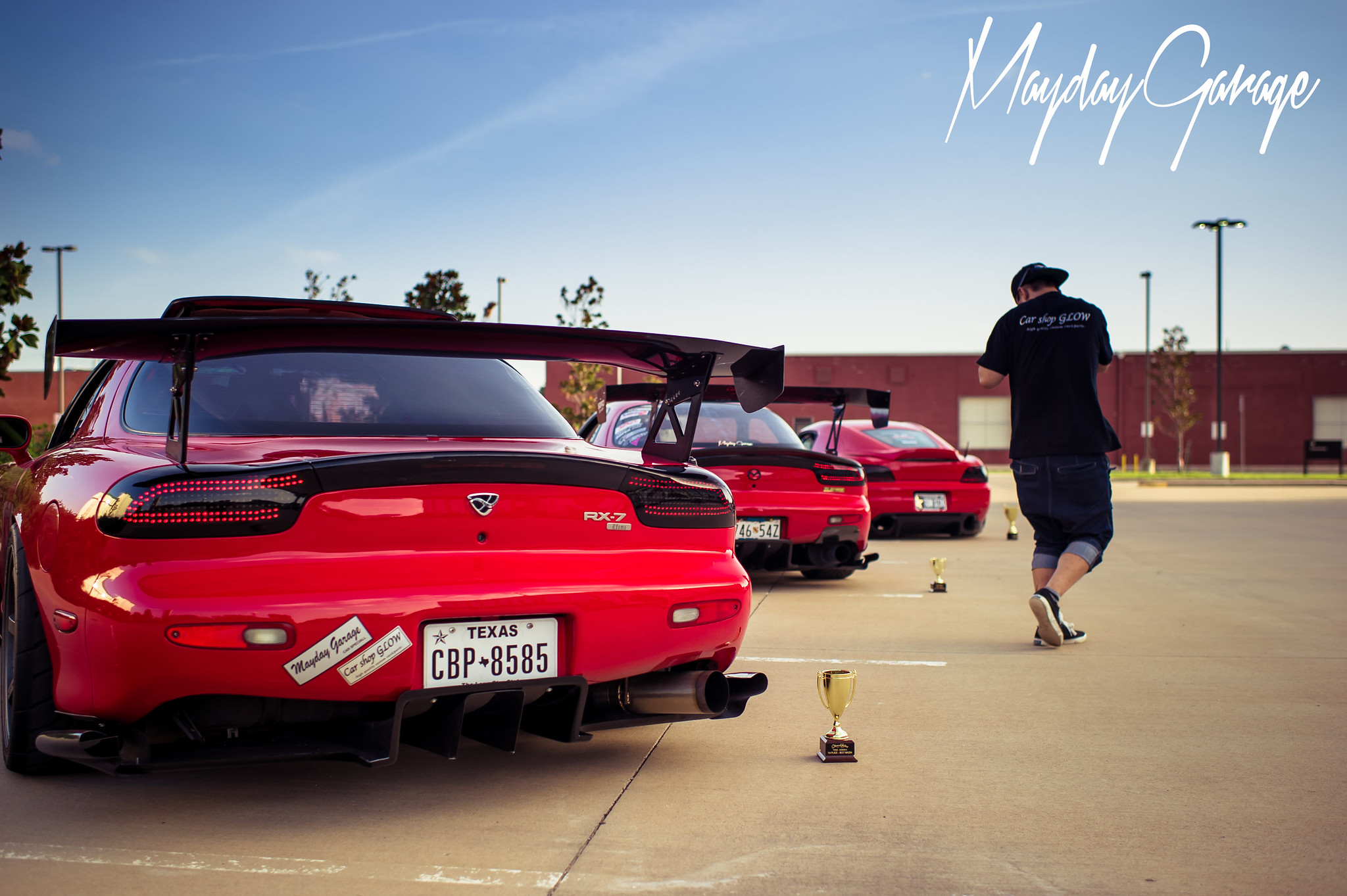 Pre orders will start in about two weeks, and we will let everyone know where we are in the process via our site, IG and FB.

See it tomorrow at the StanceNation Texas at our mini display with Car Shop GLOW! Thanks to Tom for helping us design the lights!

So it is no secret that we have been working directly with the famous Japanese tuner, Car Shop GLOW, on the next big thing: Honda S2000 AP2 LED lights. Yesterday, via our Instagram and FB pages, we dropped a bomb on the S2000 community with a pre production AP2 prototype model that you see here now. Rumors are running wild so we would like to take this time to clarify a few things.

First, a little about the tail lights themselves; when we were approached about the lights, there were a thousand ideas being thrown around, sending lights in for conversions, AP1 versus AP2, light patterns, cost and so forth. Looking at the current market, the S2000 doesn’t have too many choices for tail lights. From the outside looking in, it looks as if every S2000 has only OEM lights. When some of our friends asked us about S2000 LED lights, most assumed it would be an OEM style but retrofitted to LEDs. We wanted the lights to be unique and different. Although we are suckers for round tail lights and see absolutely nothing wrong with Hondas original offerings, we felt we could change up the game a little by offering a similar design to the CSG FD3S lights.

Upon choosing the AP1 versus the AP2 lights, we decided to go with AP2 tails for the sole reason that with AP1 lights, the outer corner was deemed to difficult to squeeze LEDs into, the space was just too tight. Now here is where we have one concern. At this moment in time, used AP2 tail lights are very hard to come by in Japan in large quantities. We have been working with Ken on trying to find even used AP2 tail lights here in the USA, but there’s just not that many. So we had a choice to make, either use previously owned AP1 tail lights and make the design not attractive, or to use brand ass new lights from OEM Honda of Japan and rip the guts out and retrofit. We ultimately went with the latter.

We feel that we could not sacrifice design or quality in the name of a cheaper product, that just isn’t us, and isn’t the Japanese way much less the Car Shop GLOW way. Fortunately for us, CSG agrees, and everyone should know that this is not a cheap, eBay Chinese made, mass produced aftermarket tail light. Every LED is hand installed by Car Shop GLOW and is properly sealed and every light comes with a 6 month warranty against all manufactured defects. These CSG LED tails are not for everyone, and the price will cater to the high end tuners in the S2000 game. We do not expect to sell a lot of these lights, and we are not in it for the money, we are in it to promote a quality product that does not yet exist.

If you are interested still in these lights, keep an eye out on our website, or drop us a line at maydaygarage@maydaygarage.com
We will be debuting these lights within the next couple of weeks, and we are positive they will destroy the internet. If you’re in Canada, you can also reach out to Circuit Garage, the official CSG distributors in Canada. Info@circuit-garage.com

We are proud to present to you our extended cut version of the (株)Car shop GLOW ≪カーショップグロウ≫﻿ FD3S RX-7 LED Tails! This promotional video will show you how the lights look aside from just photos! Shot and edited by Hai Le of JHPhotography, this is film showing our cars demoing the lights! Check them out!

We’ve heard your pleas and have asked Car Shop GLOW to make a limited run of their LED converted third brake light as an option to better match/compliment the overall look of the CSG x MG outer tail lights. Same story here, each third brake light is an entire replacement to your OEM version and is completely plug-and-play. The lights start off as an OEM Mazda Japan part that is retrofitted with the Car Shop GLOW LEDs and is then rebuffed of any scratches on the outer plastic. We are excited to bring you this part. Although far from cheap, the quality definitely shows through. The lights for now are seen on the Car Shop GLOW Time Attack FD3S and the RE-Amemiya Time Attack RX-7 piloted by Daisuke Aoki. As soon as we have these lights on hand, we will take photos to show the details!

The wait is over! We have officially launched the first Car Shop GLOW x Mayday Garage LED tail lights for the FD RX-7 starting this afternoon! We have limited supply in this first batch and only have a small amount left after this first hour of them being on sale! 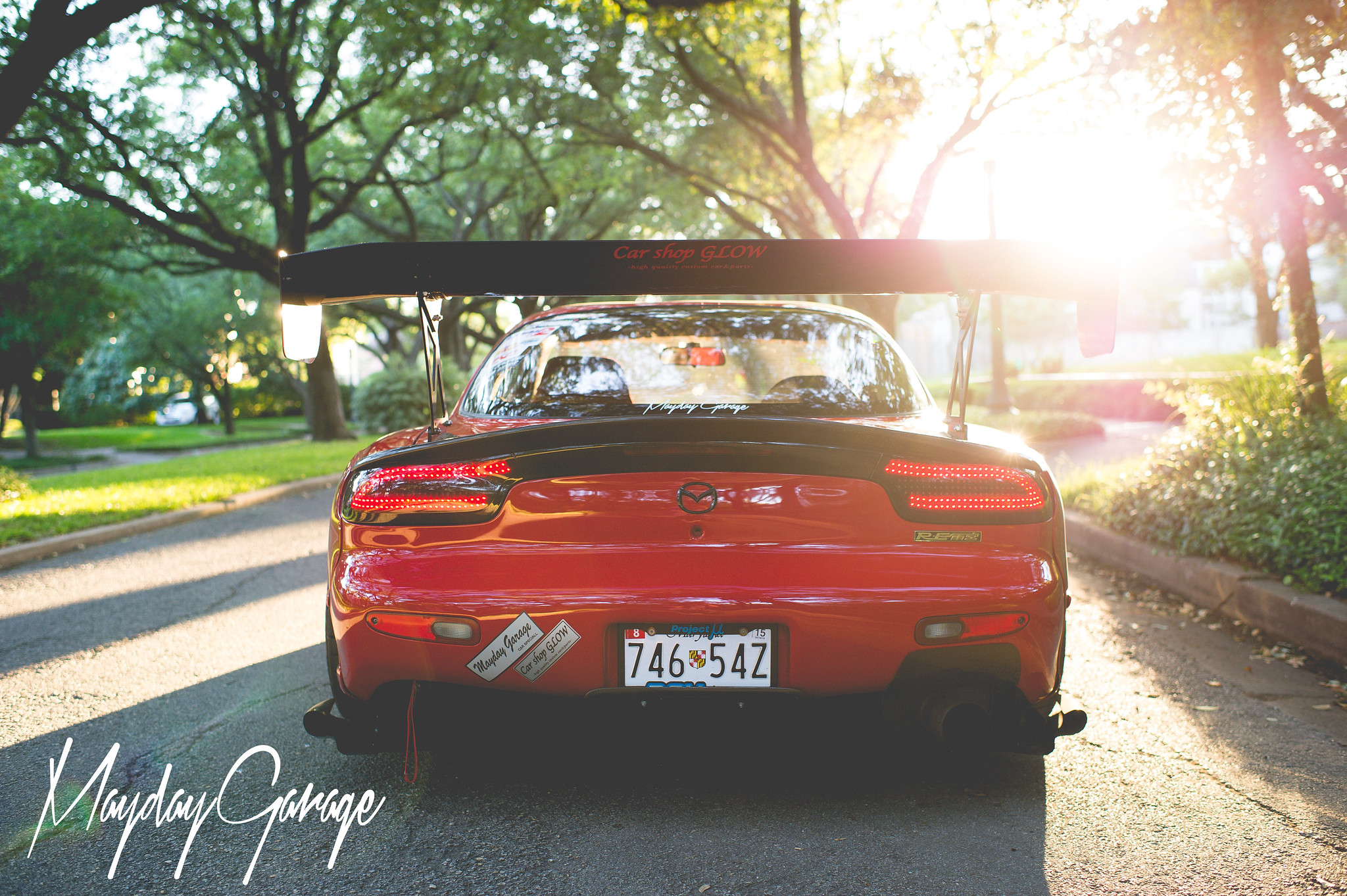 Be sure to click on the “shop” icon above and check them out yourself! This has been a long time coming, and we are super excited about these lights. They are the first of many LED tail lights, with a few designs down the pipeline such as Honda S2000 AP1/AP2 and FC3S RX-7’s. 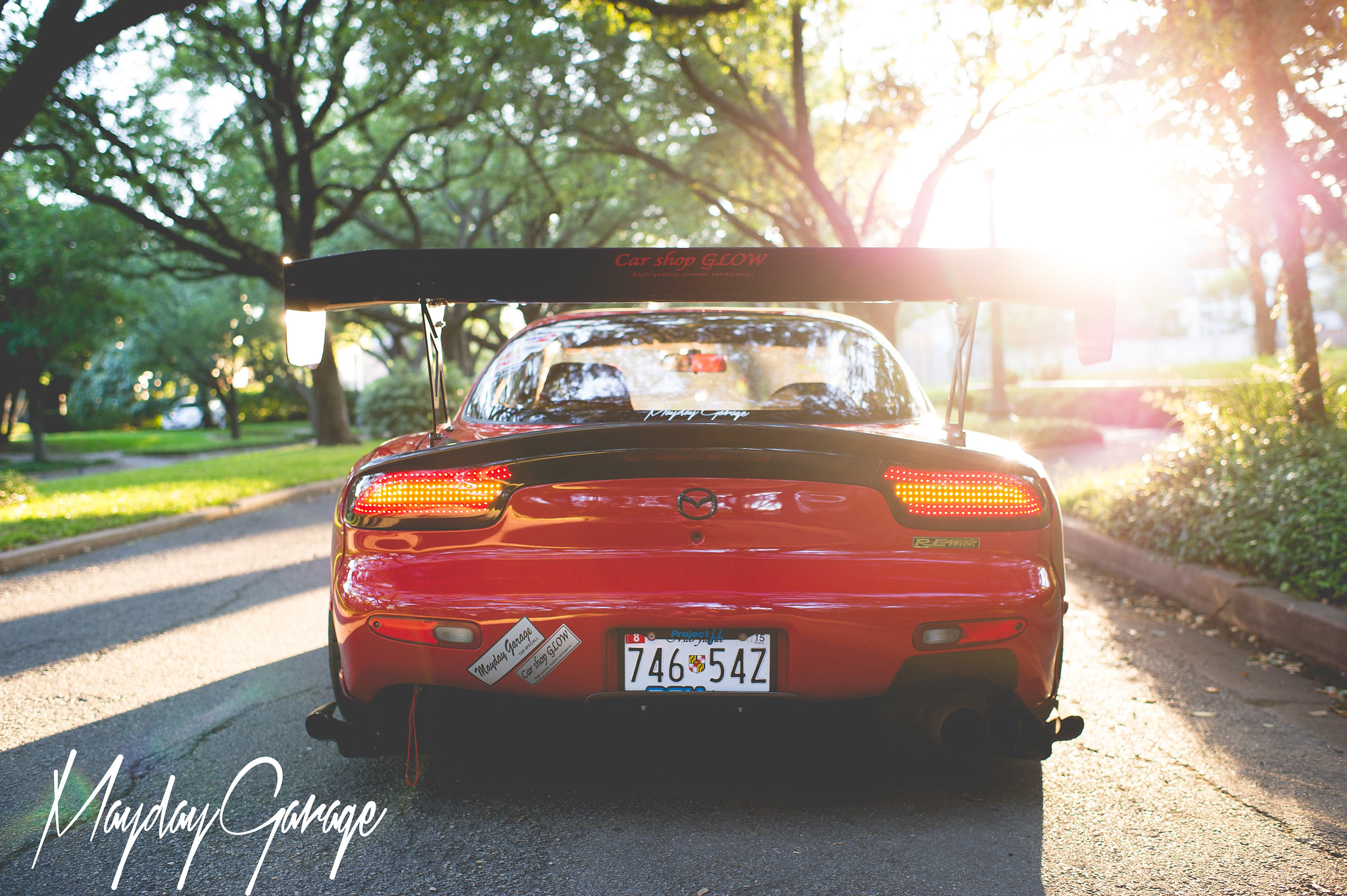 Once this initial batch of LED lights sell, we will have a backorder list for the next 5-10 sets. Once the new batch is ready from Car Shop GLOW, we will have them shipped ASAP to us in Texas and send them as quickly as we can to you. For all inquiries, please email us at Maydaygarage@maydaygarage.com

All other questions, feel free to leave a comment here!