So now you know about our brief adventures with 1013mm, QuickWorks Photo, our Ricer Wednesday and Coffee and Rice meets, and even our history with Japanese Tuner, Car Shop GLOW, so to finish off the Year in Review series, we wanted to end it with our return to specialized meets, specifically, our Japanese Nostalgic Car Meet and the WekFest TX PreMeet but due to the sheer amount of photos, we had to split this one into part 5a and 5b!
CLICK HERE FOR PART 5b!! 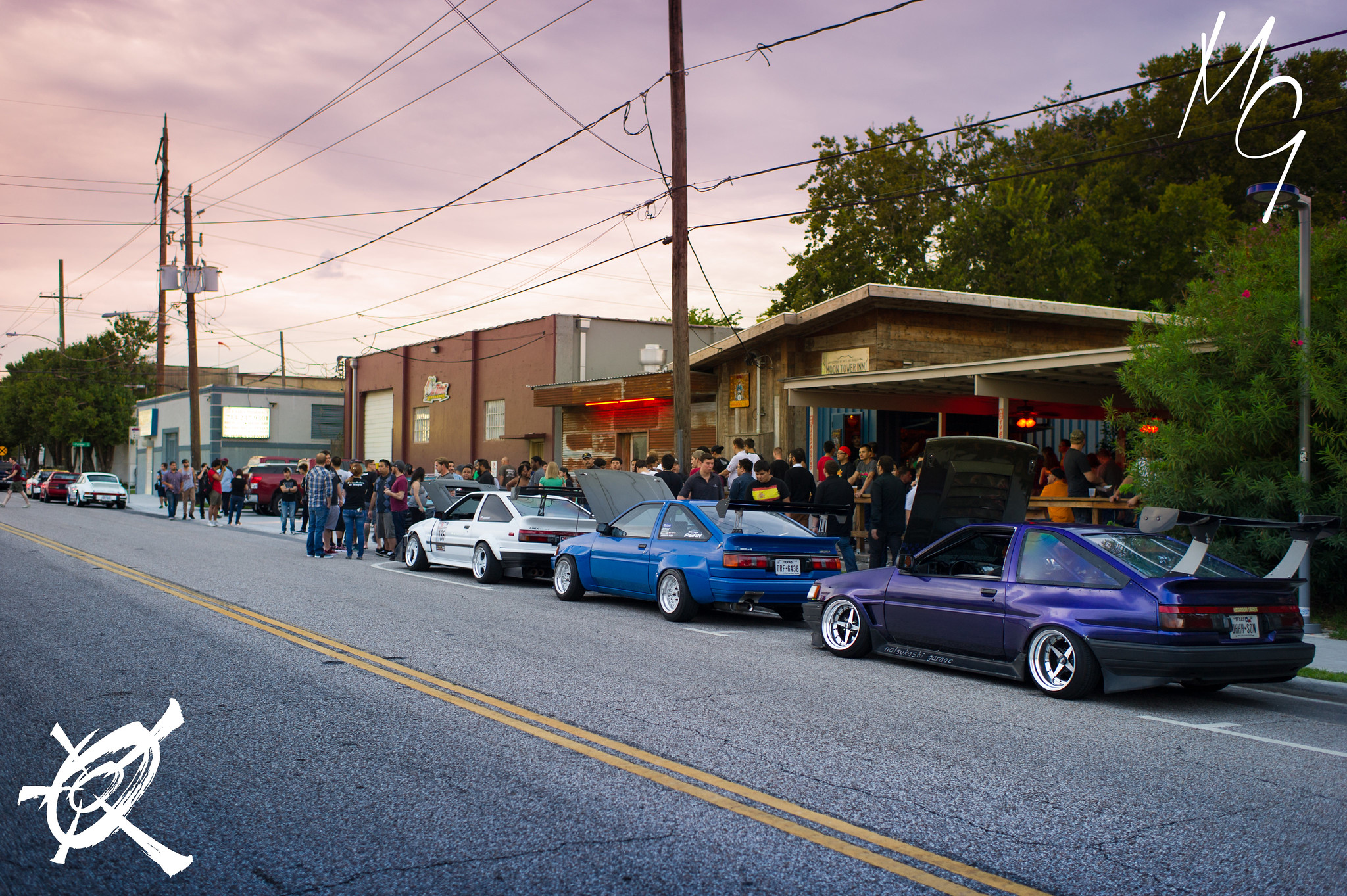 So 3 years prior, we had an idea that maybe we could gather all the really cool Japanese vintage cars from the southern region of the US to one location right here in Houston. With our friend Linhbergh Nguyen, we dubbed it, “Japanese Nostalgic Car Meet” or JNCM. We didn’t know what to expect from this open call, but it was one of the most fun meets I had ever attended. Cars from all over Texas showed up in their unique rides to enjoy a beer and a hotdog with other like minded vintage car enthusiasts. 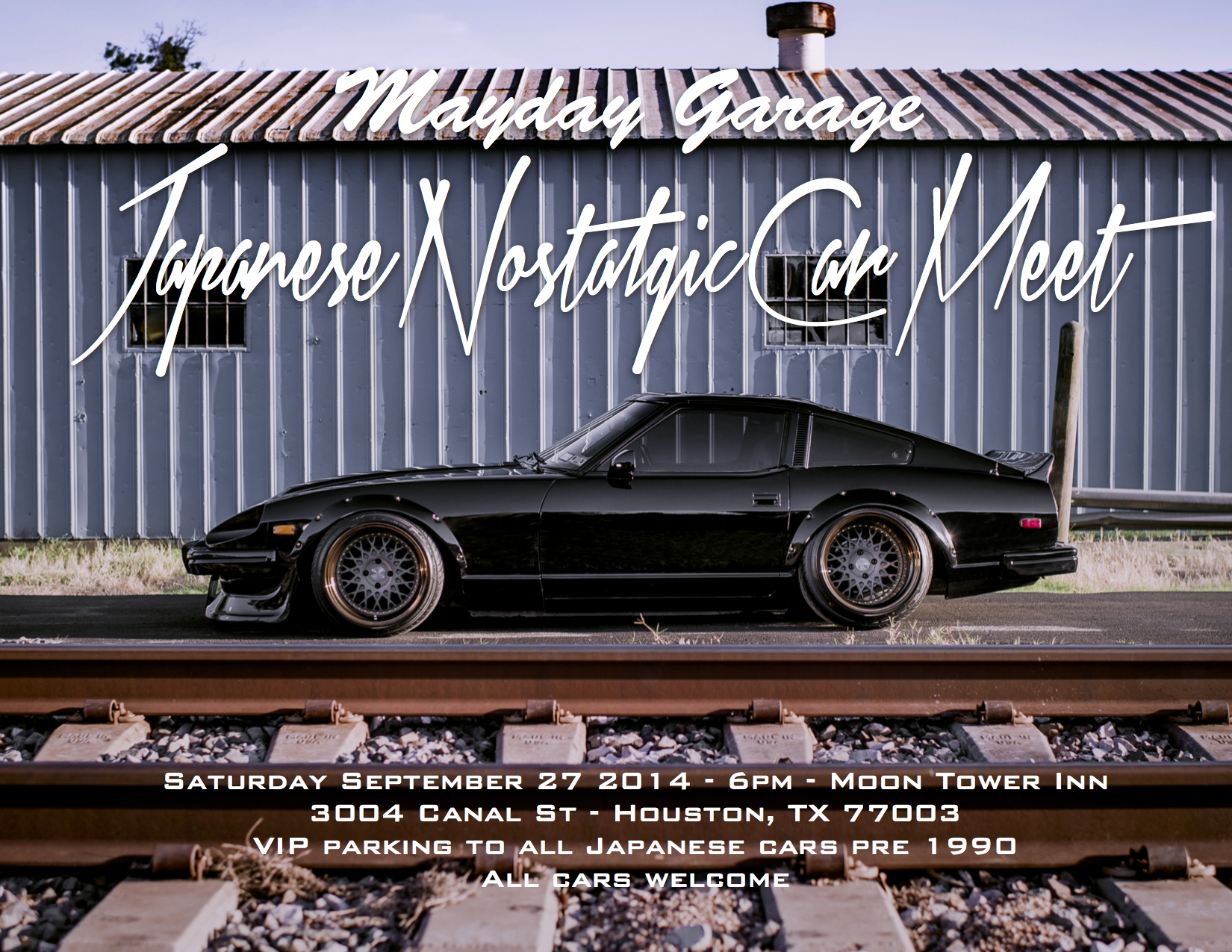 Every year afterwards, we had people ask us when the next one would be. After much procrastination, it was time to make the public call for all owners of these JDM classic machines to gather once more. To prepare and give an idea of what exactly we were looking for, we had asked our good friends Peck and Bruce to let us photograph their very unique classic cars. One would represent the old, old school, and the other would represent the old school with a modern twist.

First was Peck’s ahhhhhhhmazing authentic JDM AE86 Levin hatchback. This thing oozed JDM race car from yesteryear, from the ITB’d 4AGE motor down to the N2 wide body fender flares swallowing the SSR reverse mesh mesh wheels. Peck has been a Mayday Garage supporter from the beginning, and his knowledge of old school Japanese tuning parts and cars is something that should be documented in a book as he is a huge parts collector/hoarder. The car hadn’t seen the streets in many years so it was such a cool thing to see in person as Khiem was taking epic photos of the car. 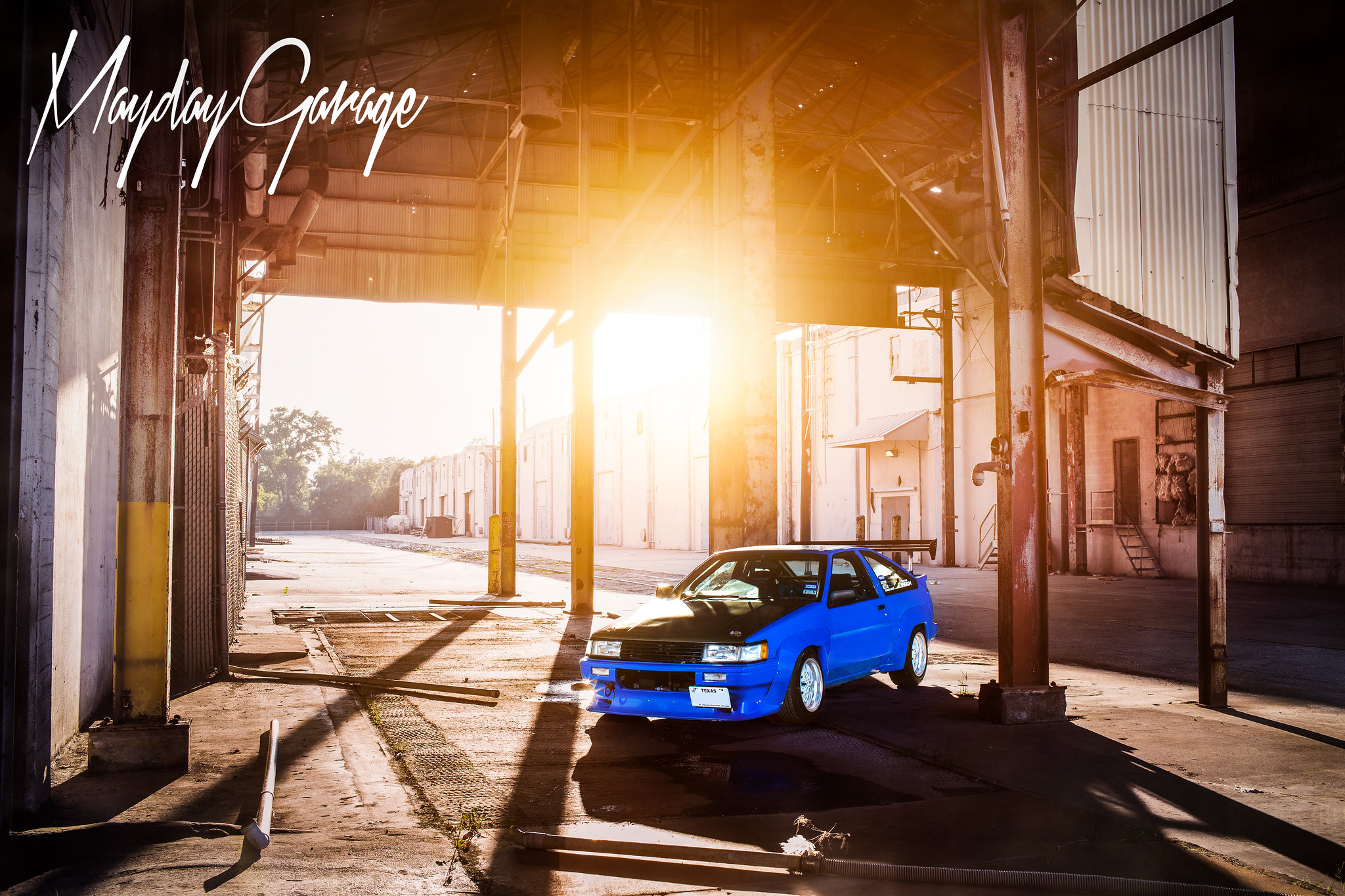 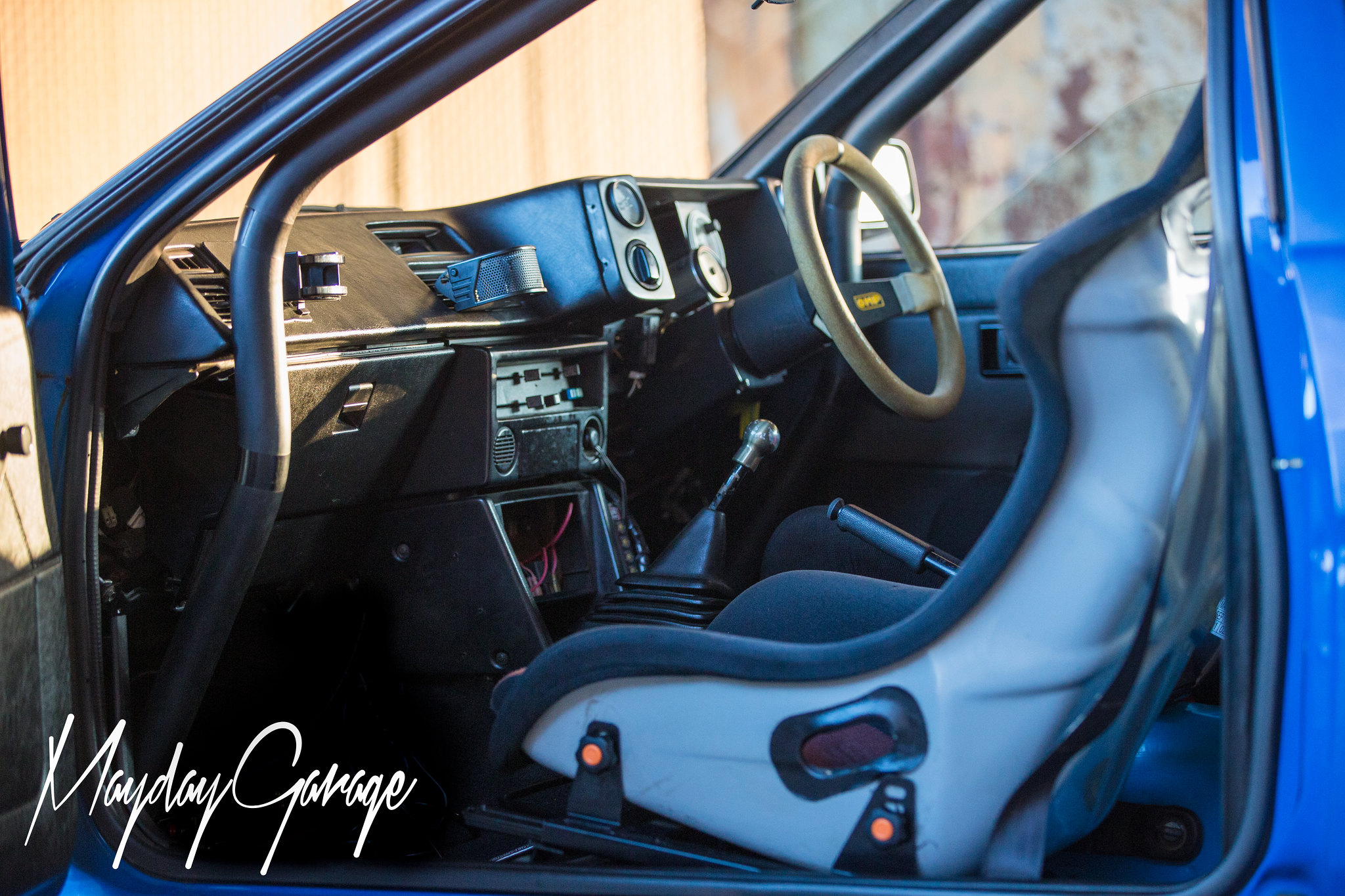 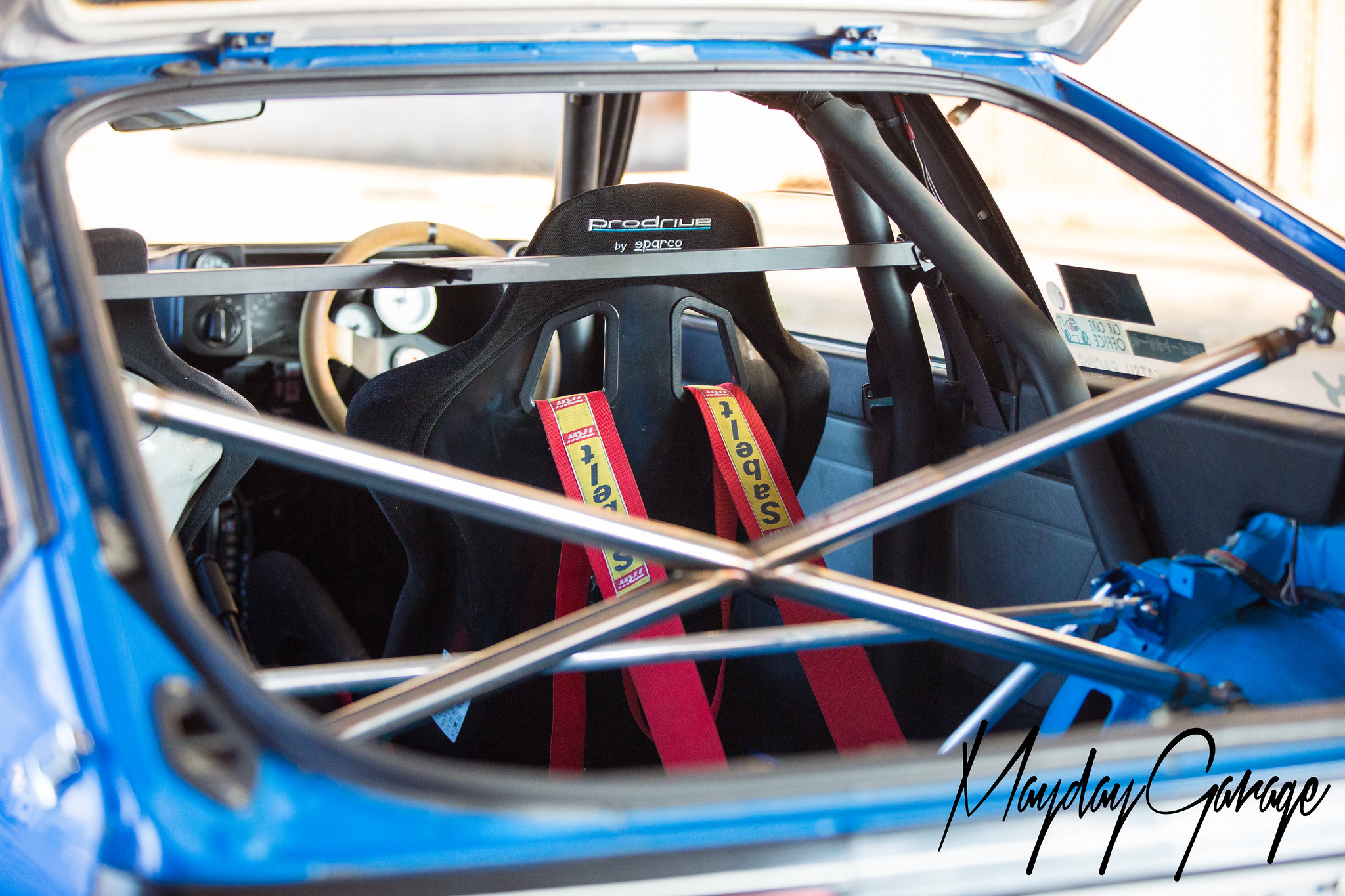 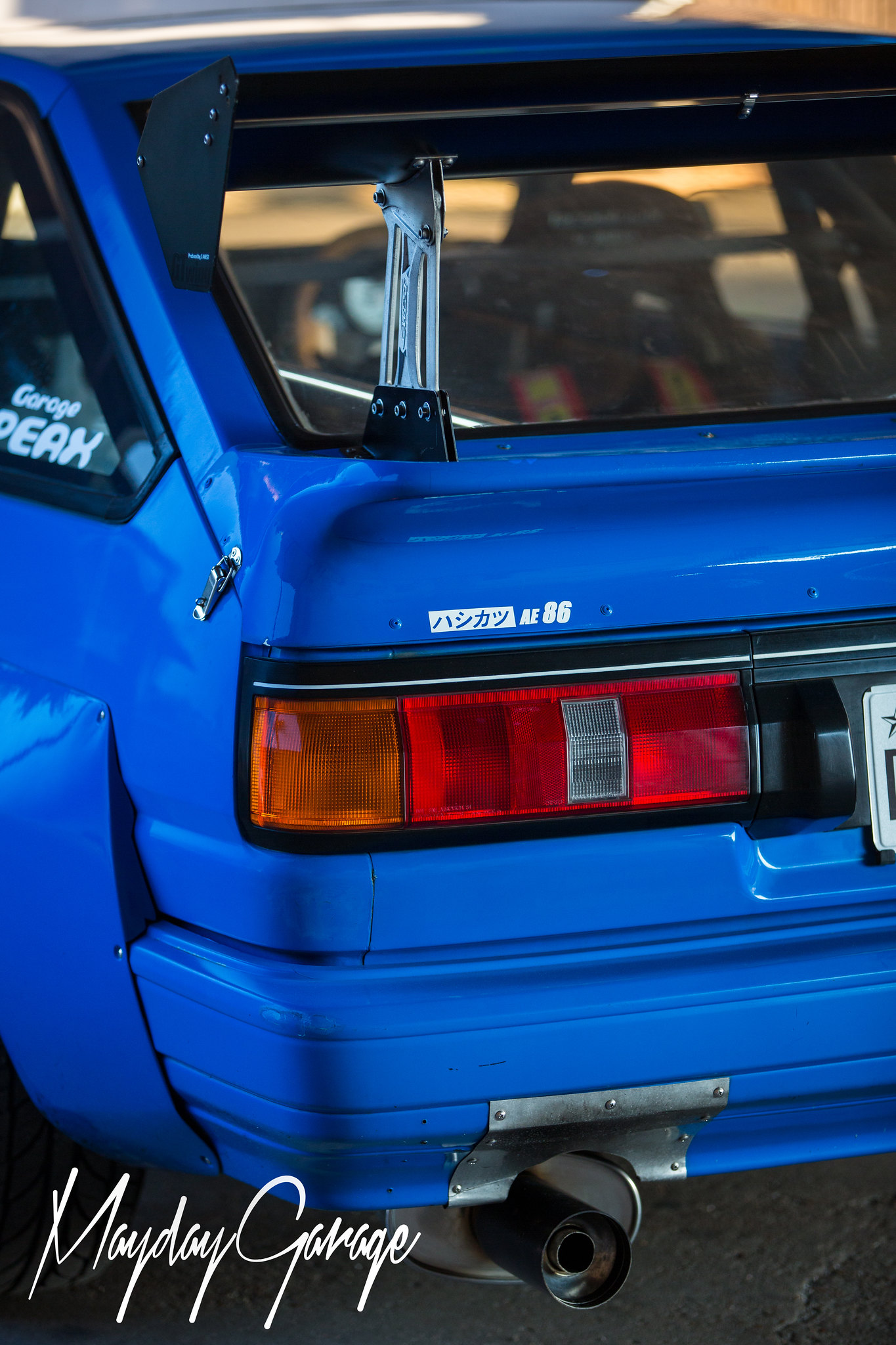 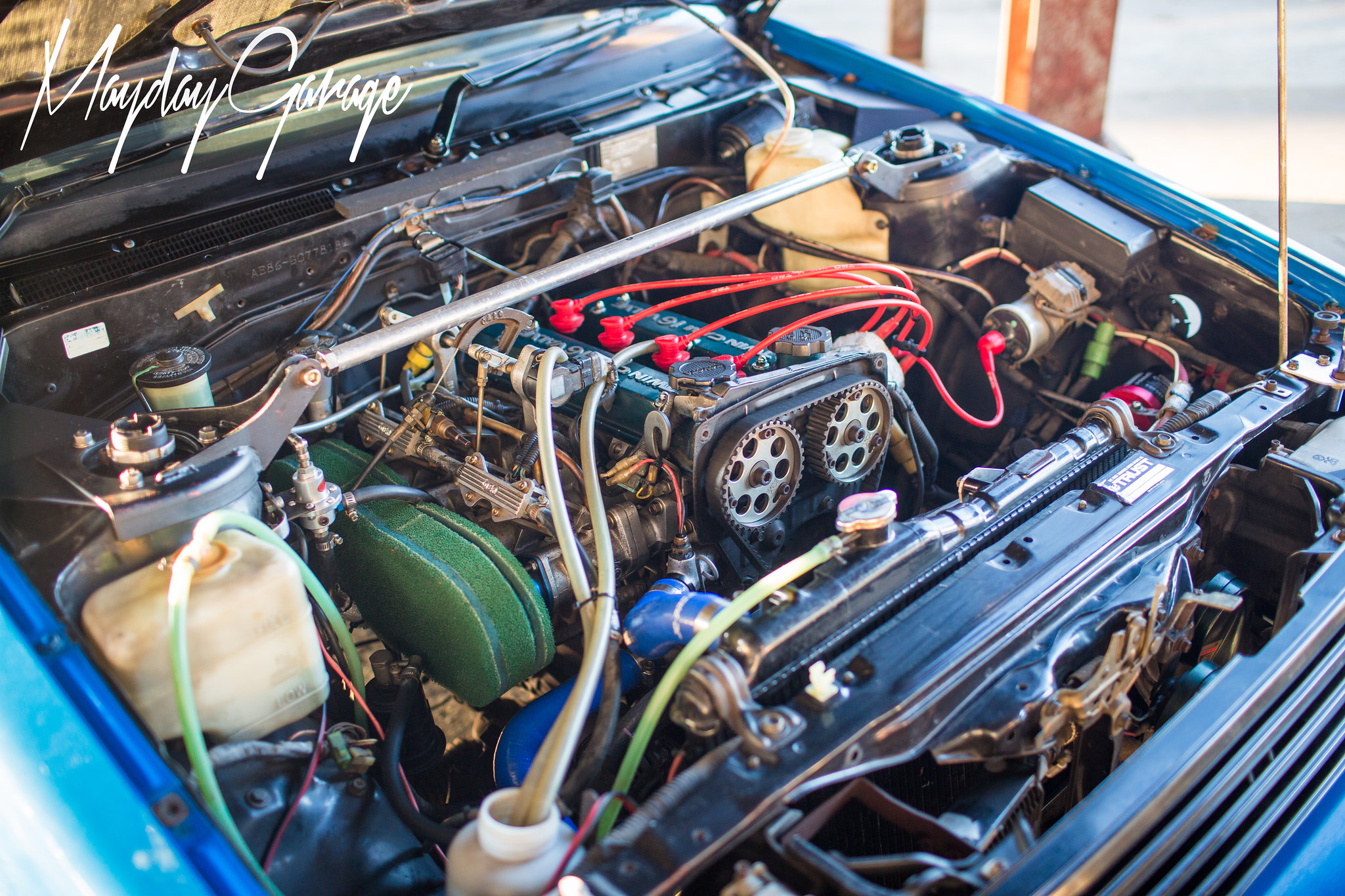 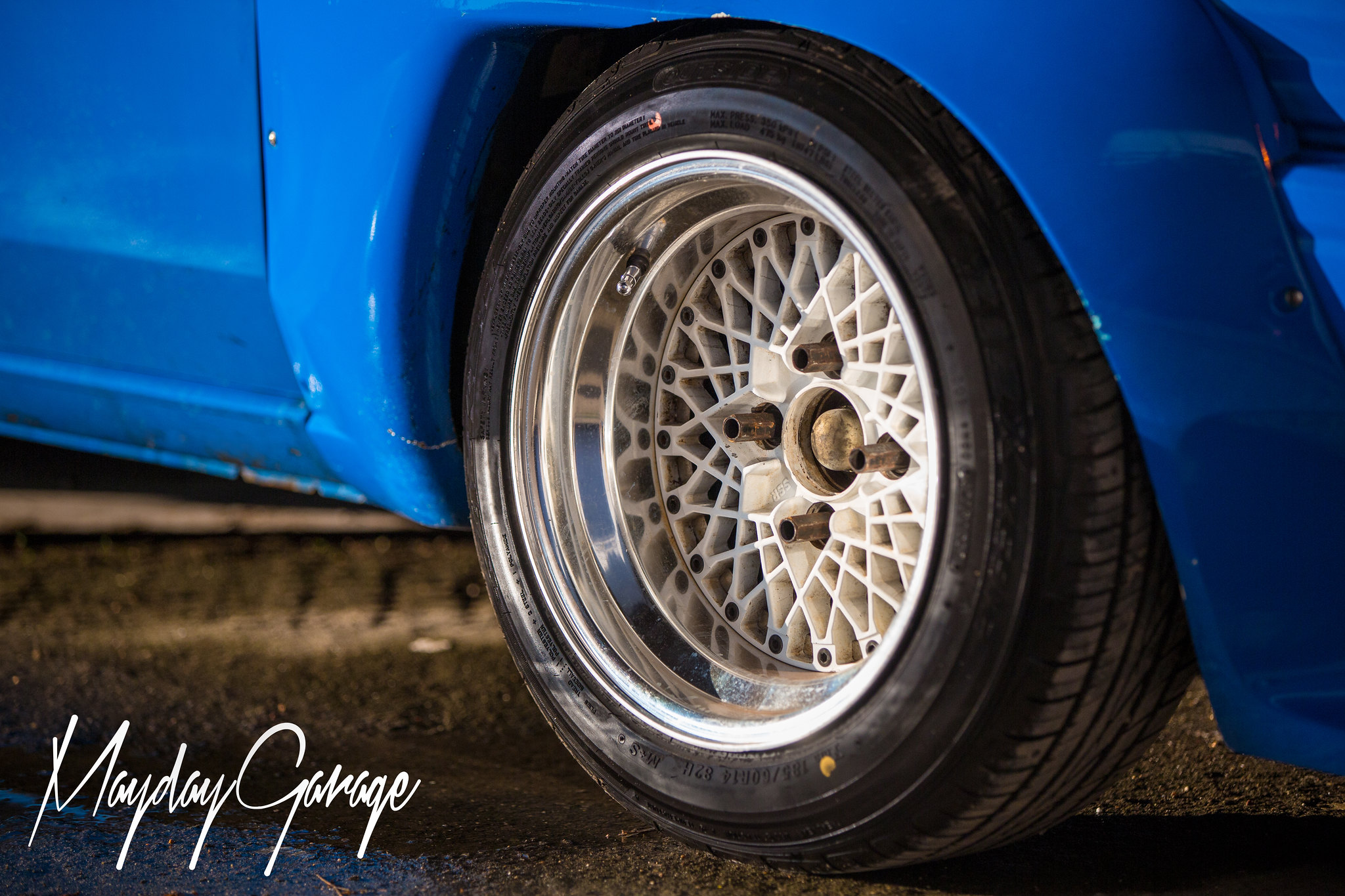 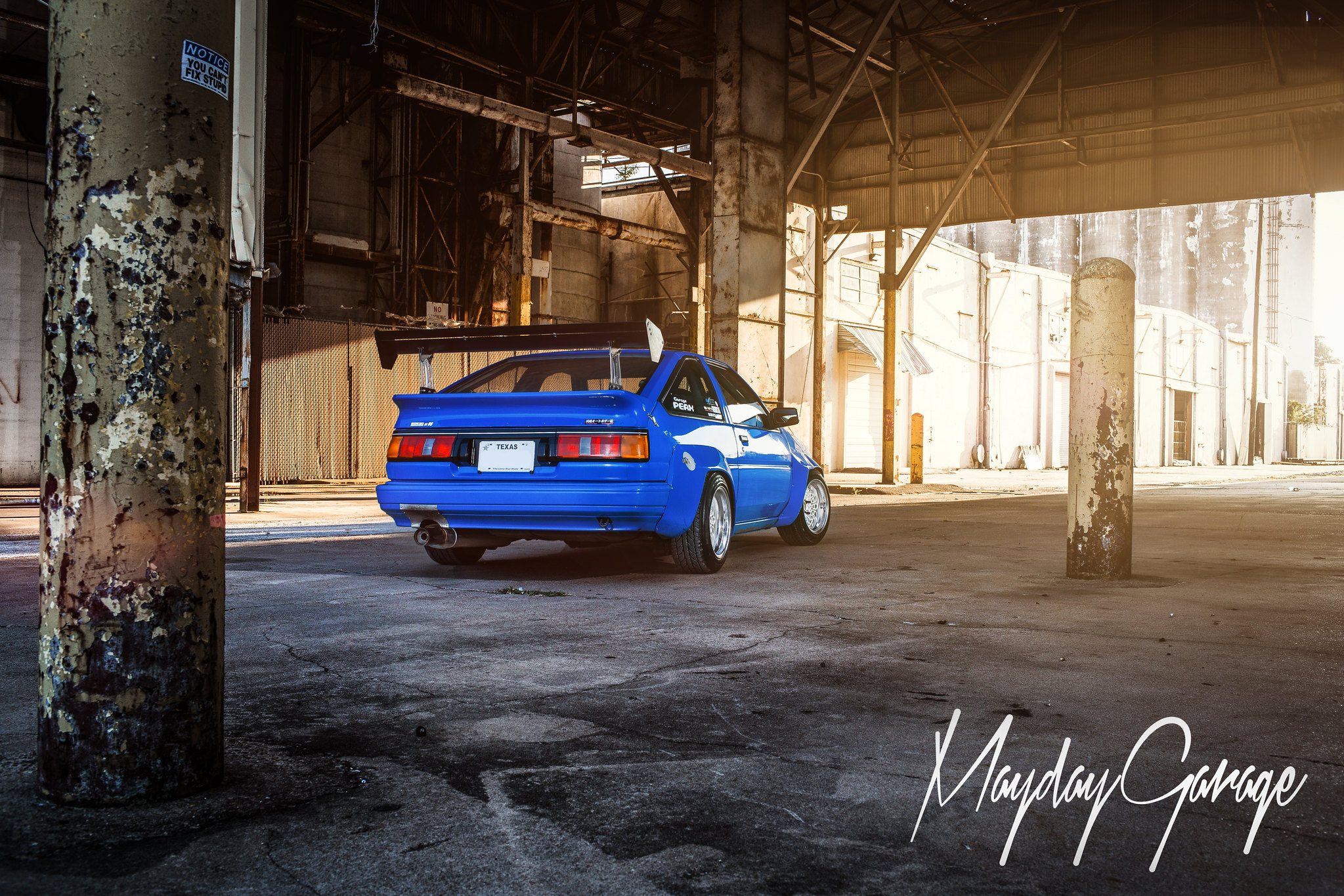 To show that we are not only into JDM everything, we asked for now-e-famous Bruce Lareto to let us capture his stunningly clean, bagged S130 Datsun 280zx. We’ve watched Bruce’s car evolve from just a bone stock 280 to what you see now. Bruce had big plans from the get-go and was able to realize his goals through hard work, trial and error, and never giving up on that vision. His car is ever evolving, and he currently is breaking in his new motor and will be test fitting a rear diffuser on his car, so that will be exciting to watch. 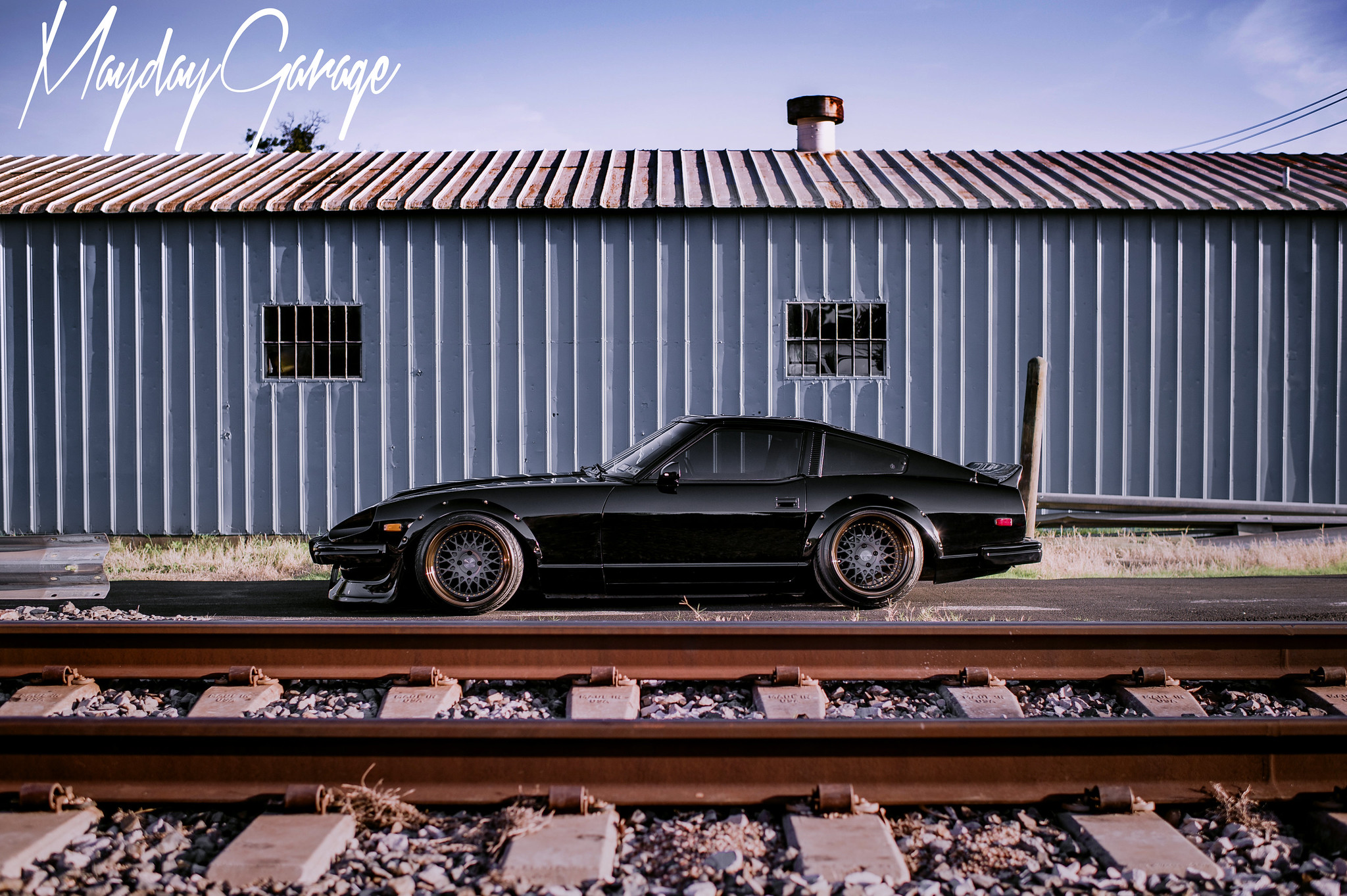 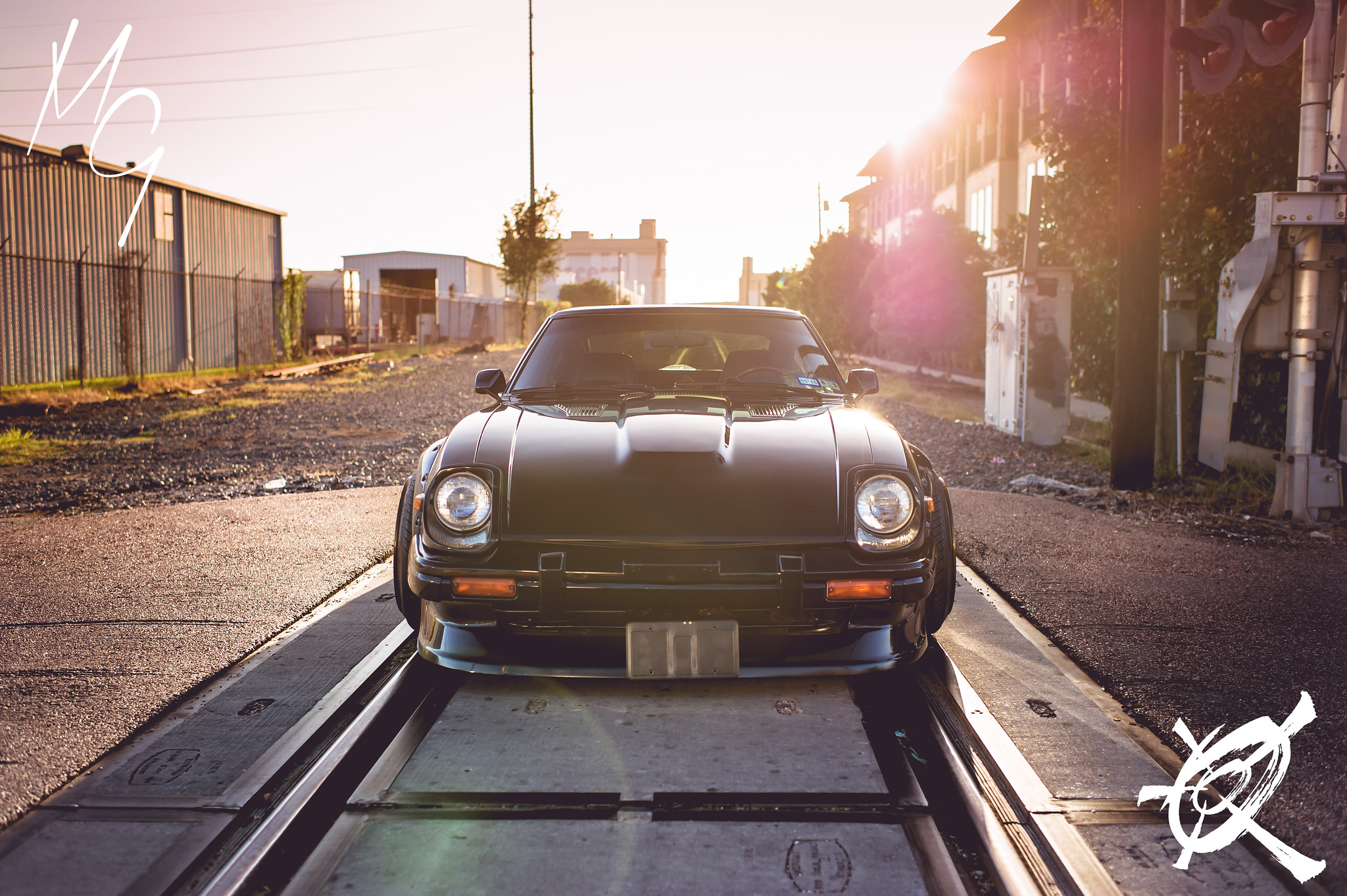 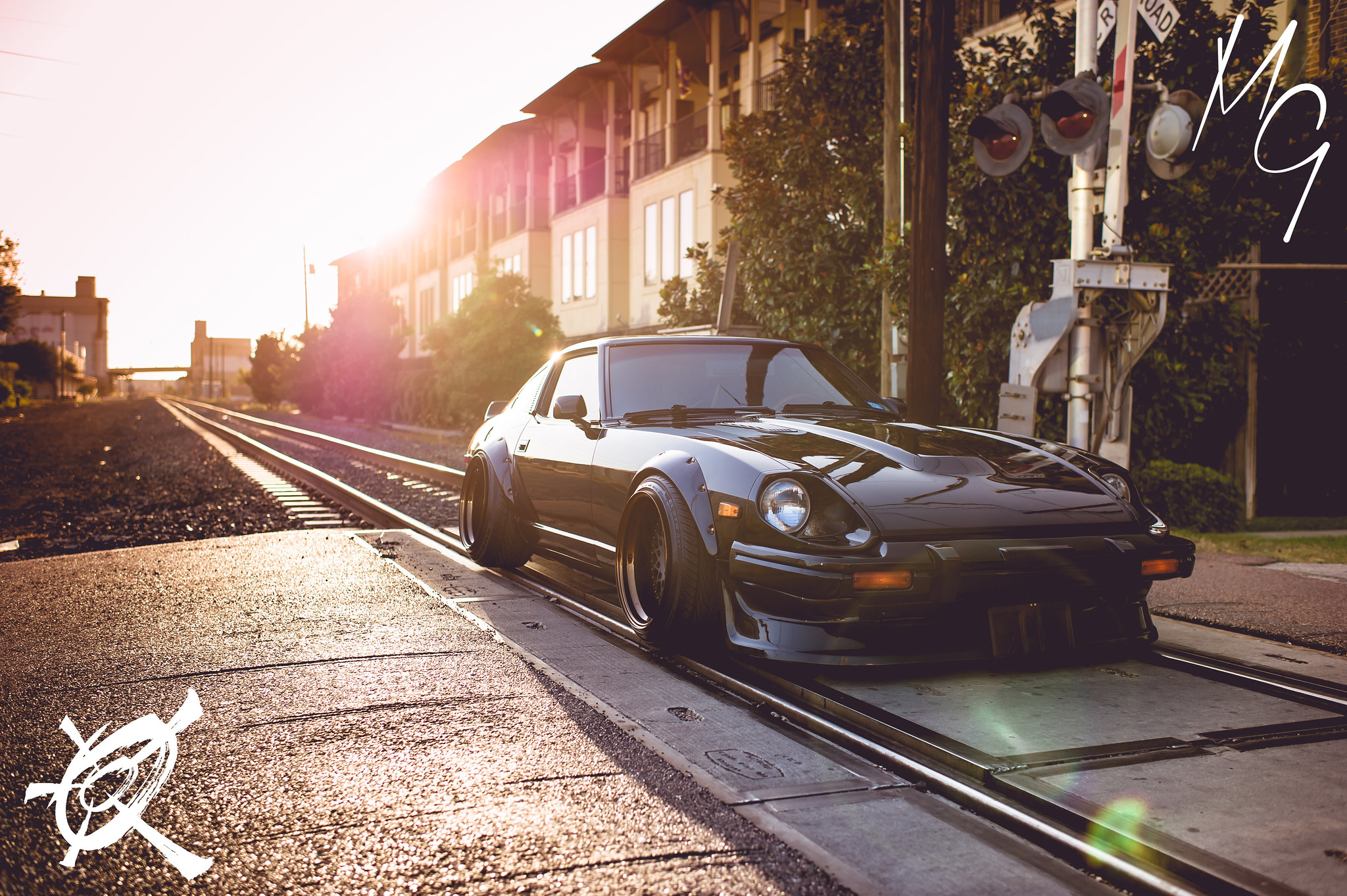 Now that we established what we were looking for, we anticipated a good showing for this meet where the weather wasn’t scorching hot, and it wasn’t cold outside. Located at the same place as 3 years prior, Moon Tower Inn in East Downtown Houston made much sense as the atmosphere is very relaxed and there was plenty of potential parking.

We also had to establish a few ground rules. 1- Vintage cars were to have priority parking because, you know, it’s a vintage car meet. 2- to be qualified as a vintage car, it had to be made in Japan, and have a model year before 1990. 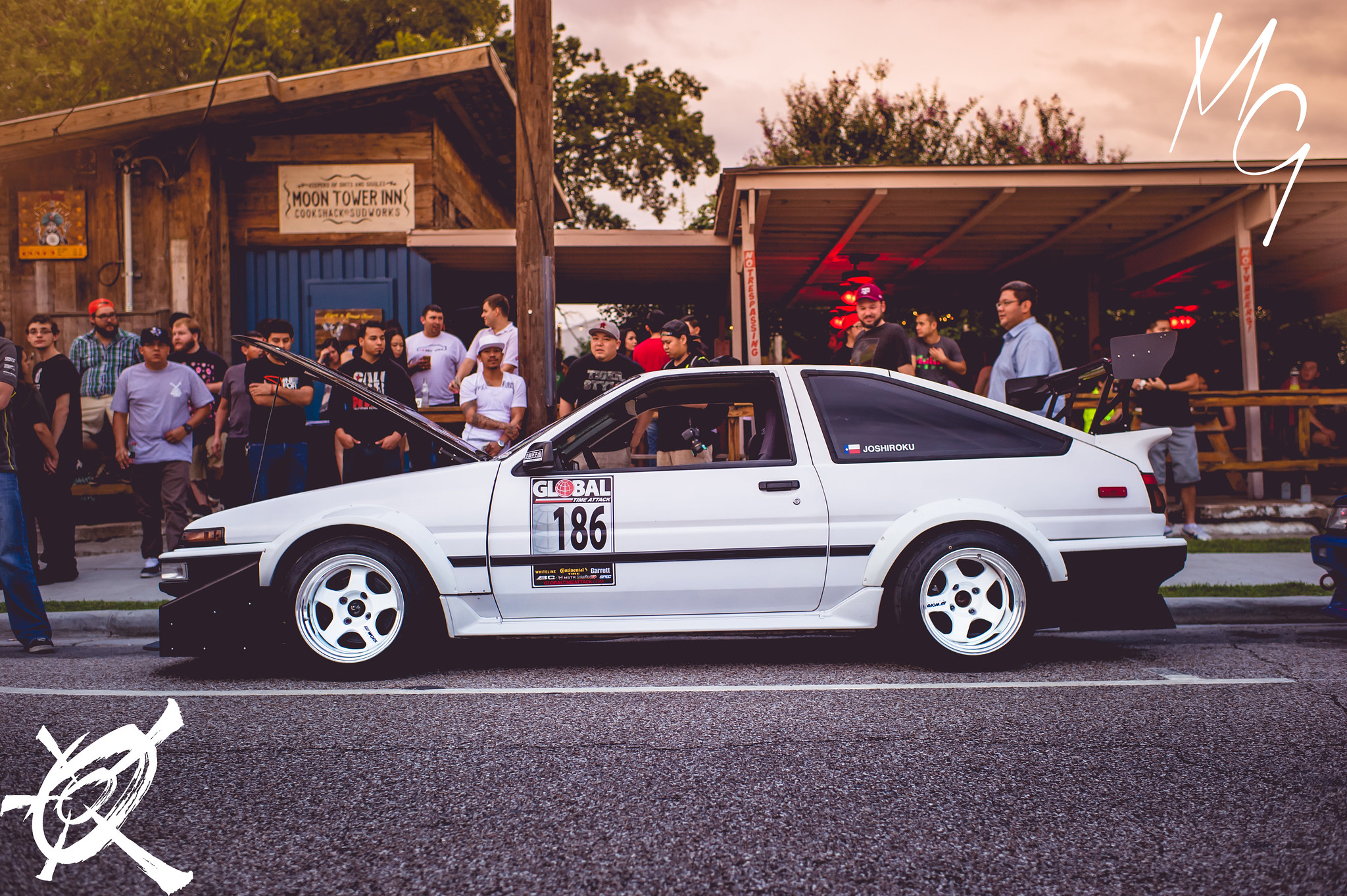 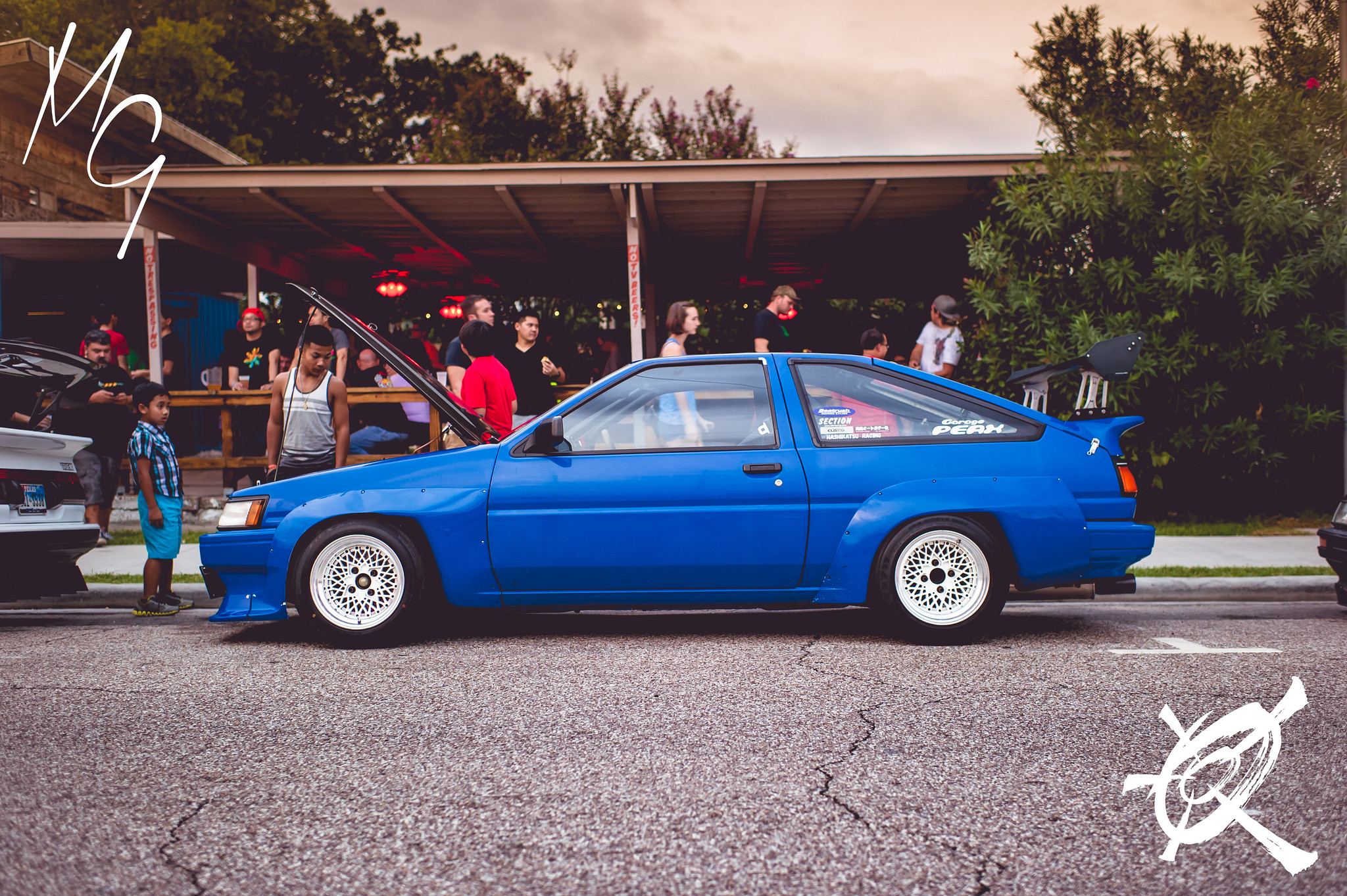 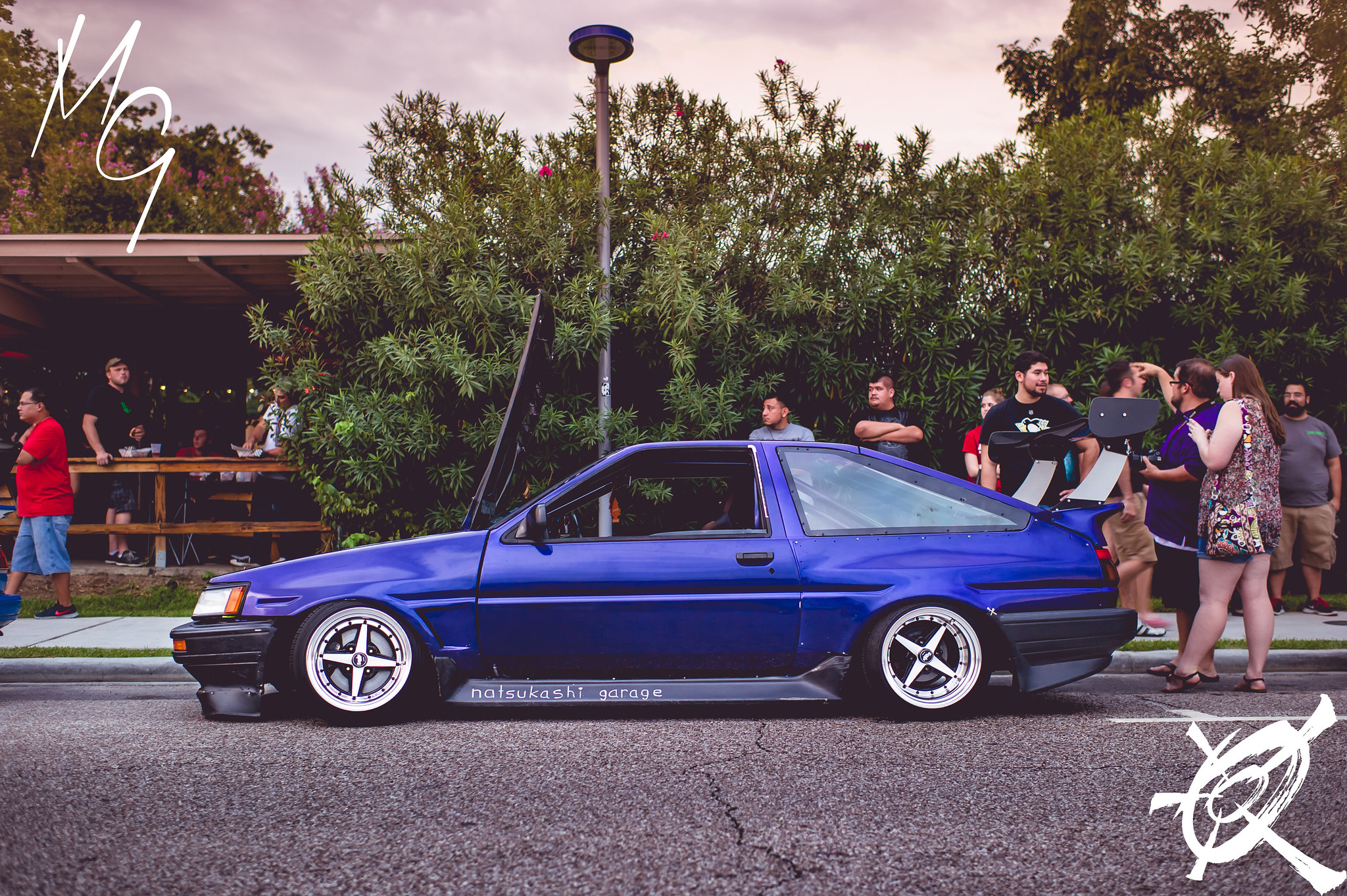 The turnout was absolutely beautiful. There were so many cars that were vintage, that we ended up cramming a ton of them in the designated areas and the streets were soon filled with all makes and models as everyone had a thing for classic Japanese cars. We saw all kinds of people from all walks of life, aging from 1-92, it was truly a sight to see, and the general consensus tells us that we need to have more of these types of meets in the future. 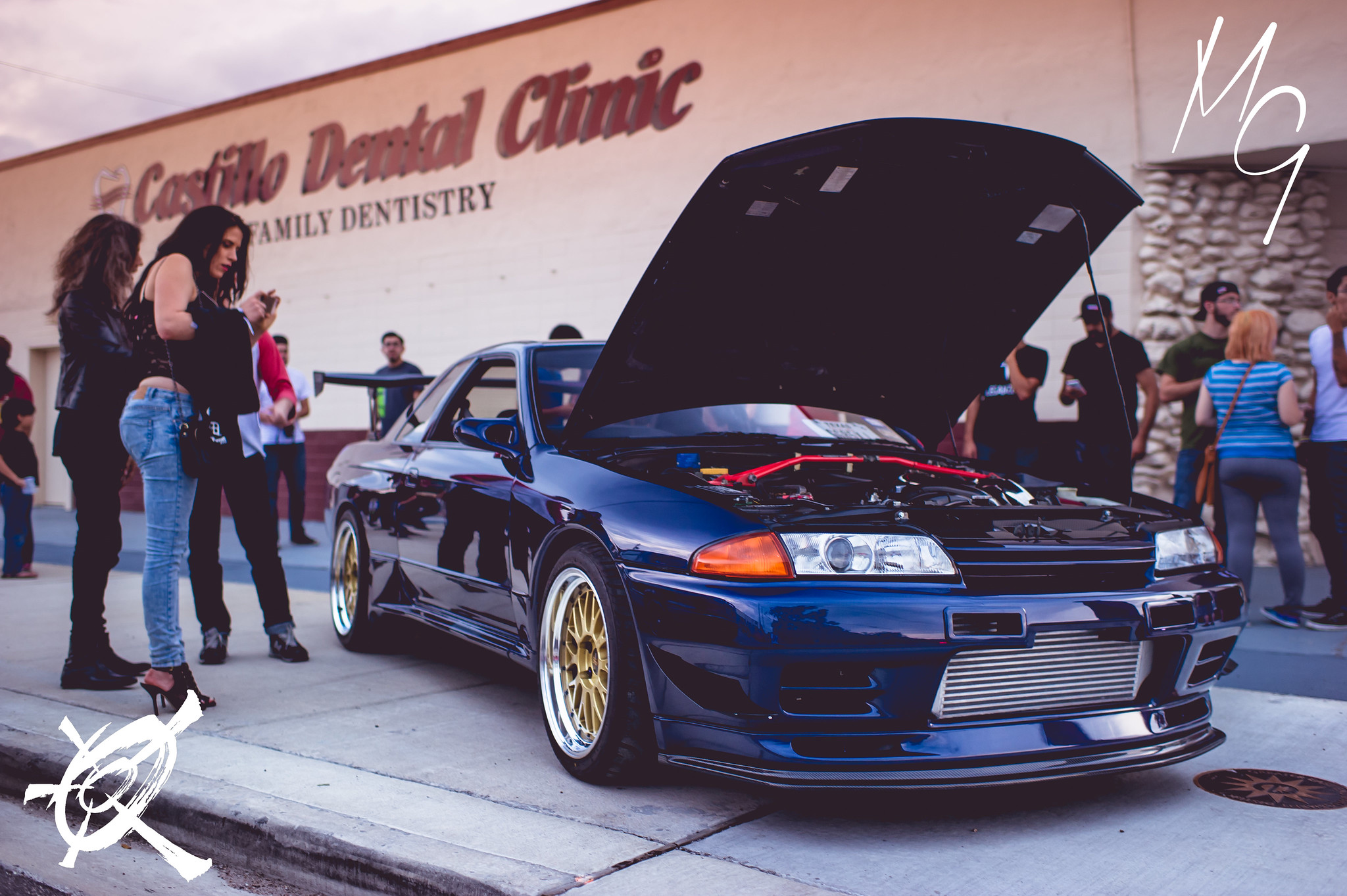 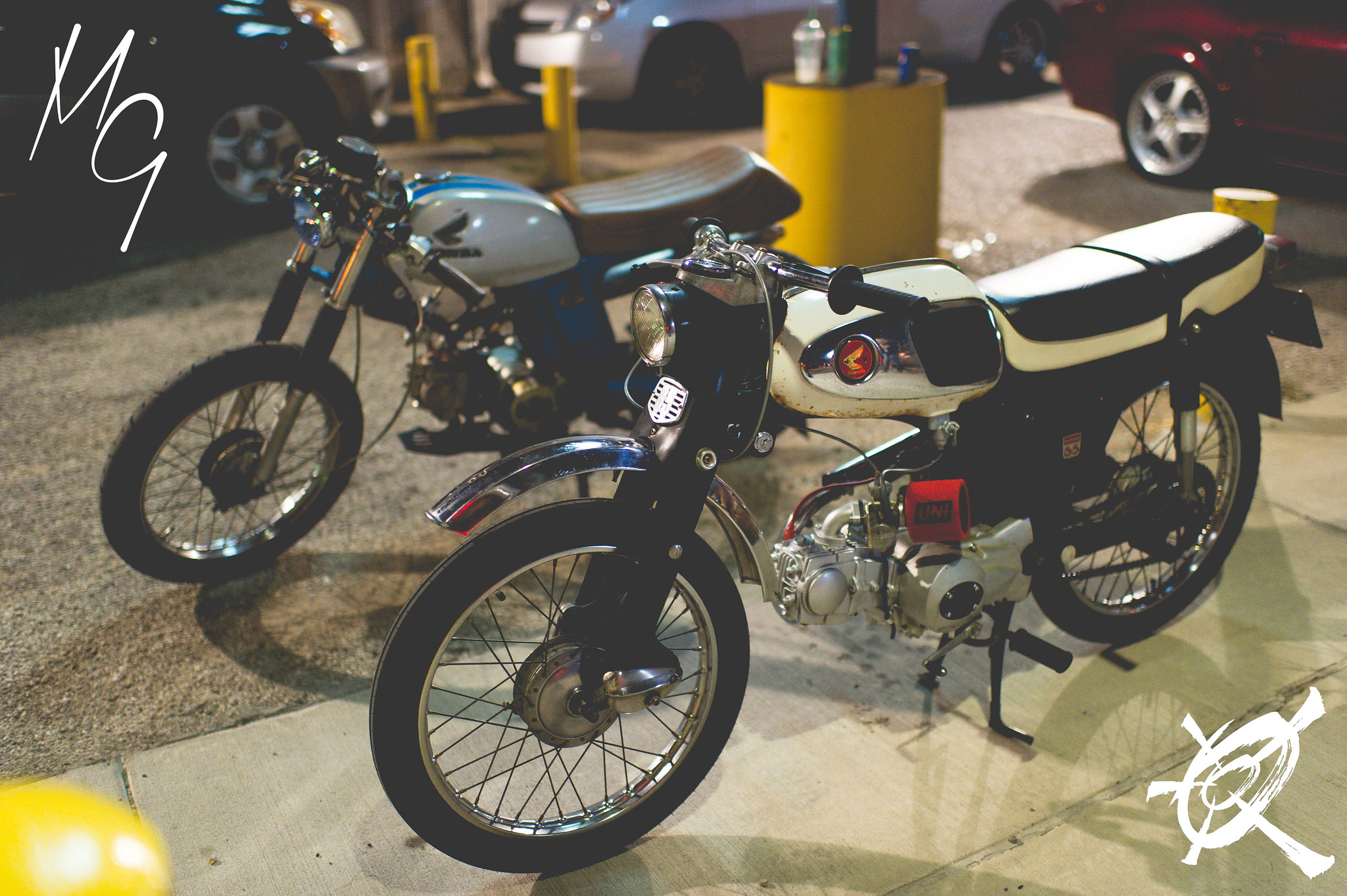 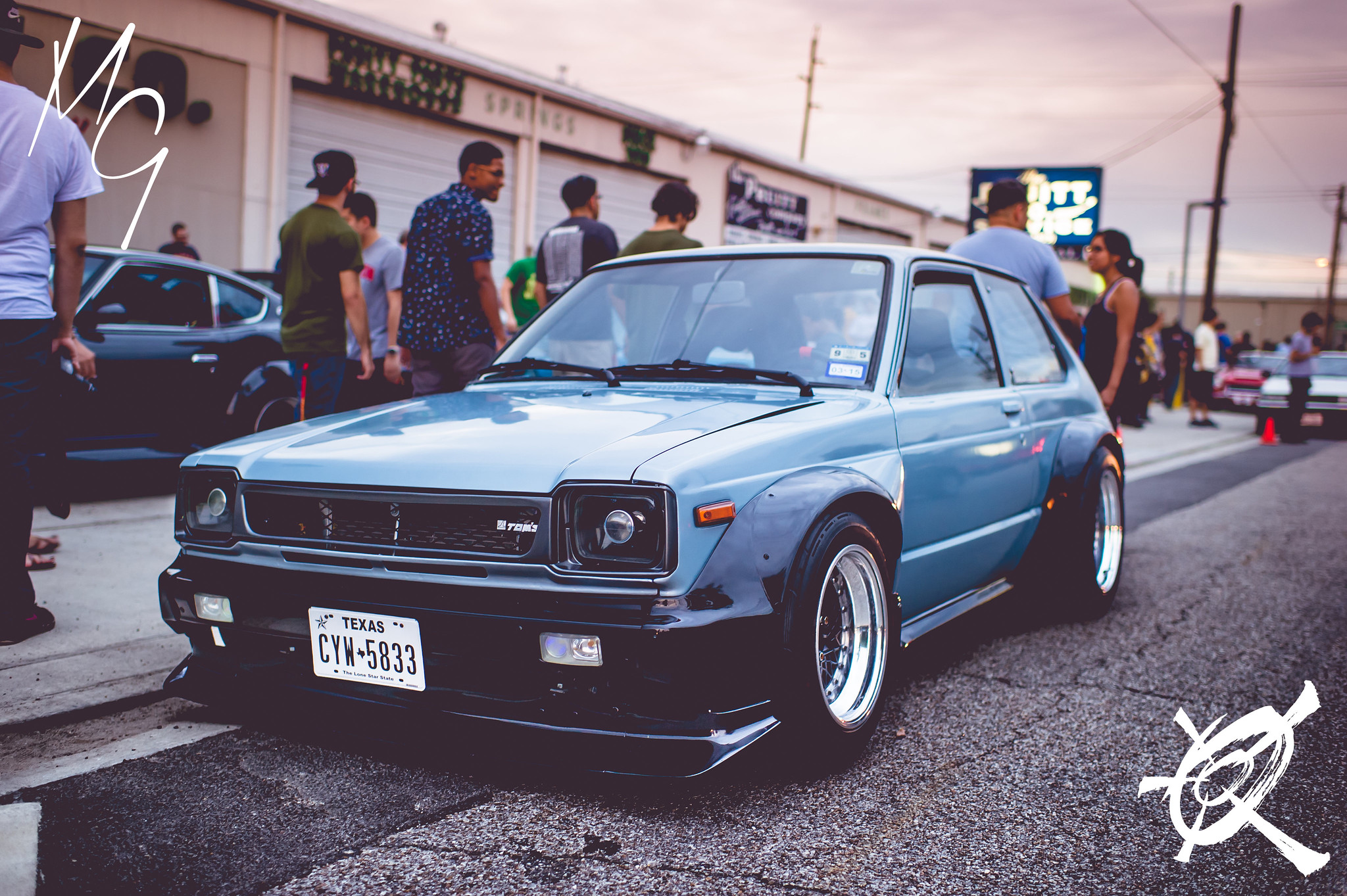 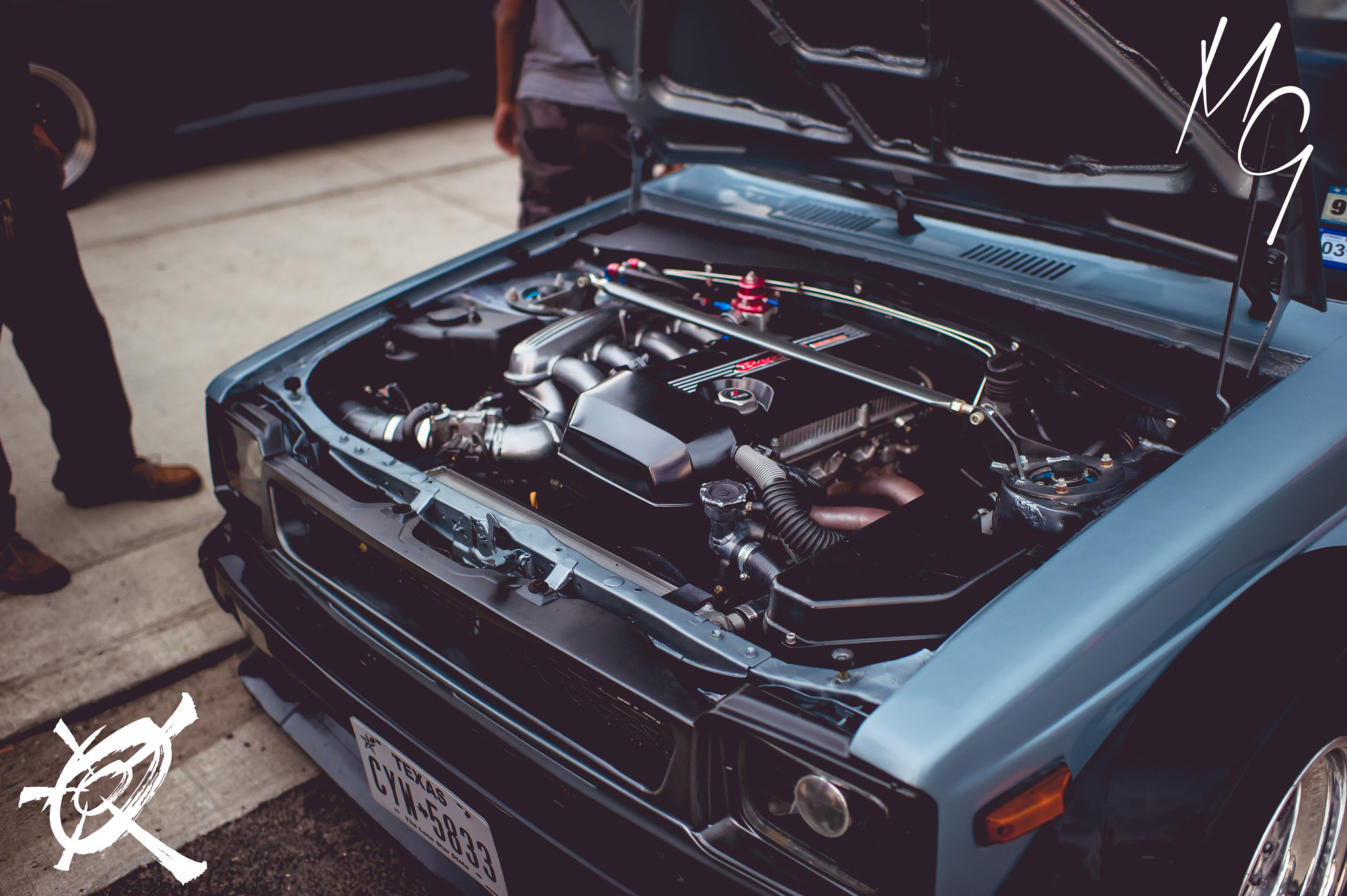 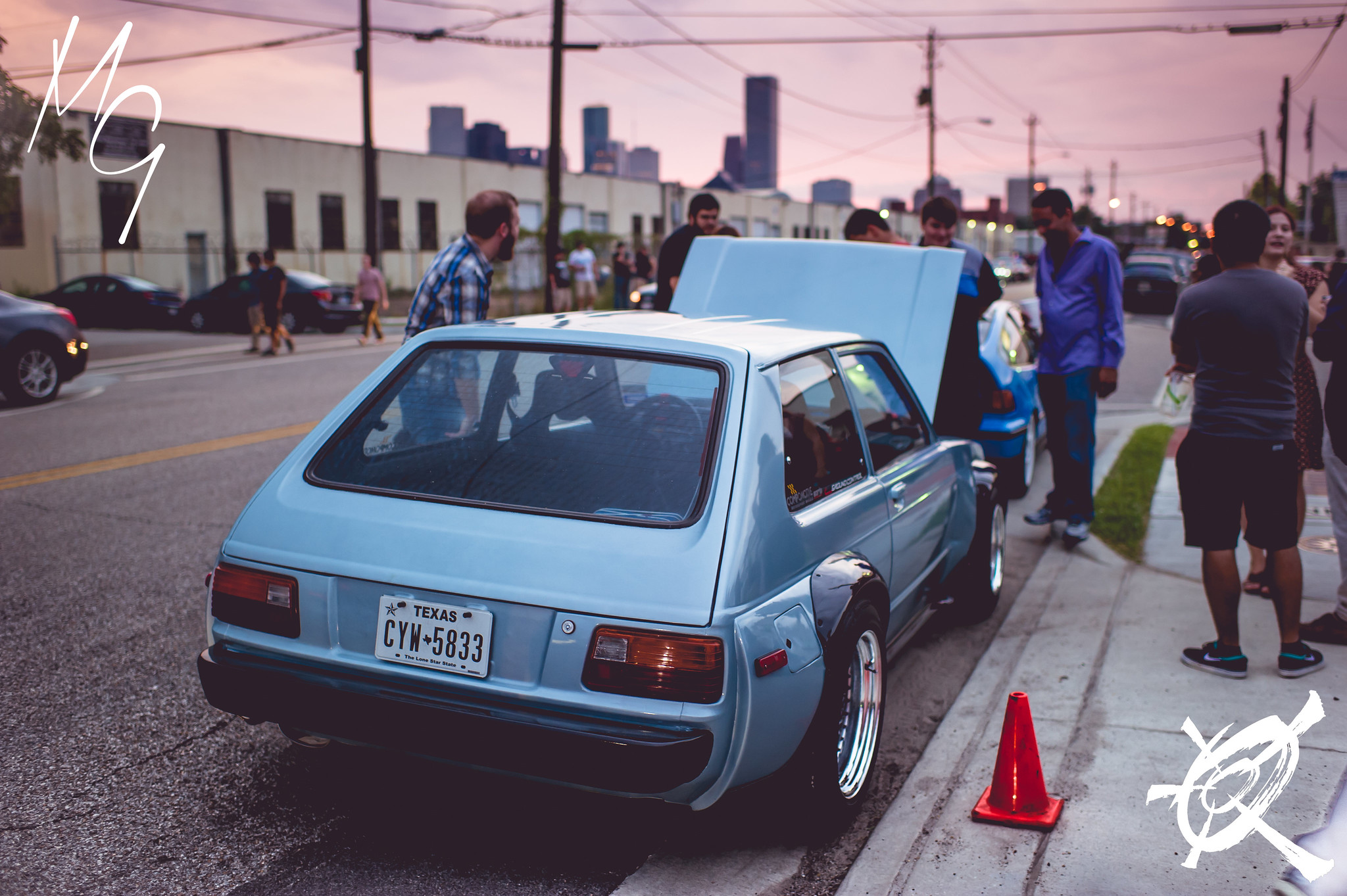 Some have called us, Mayday Garage, the unofficial preservers of 90’s Japanese tuning, and while we love the way that title sounds, we can’t take that credit. It is not just our close group of ricers that glorifies this golden era of tuning, but individuals such as Peck Panichapong from Houston, TX that help educate newcomers to the import scene to appreciate this style.

Peck Panichapong moved to Houston about 12 years ago, and quickly began his search for a RWD project car. He found it in a SR5 model which also carried out his daily duties. Much like a certain famous tofu delivery driver with a similar car, Peck found himself driving the little Corolla 100-plus miles everyday for work through the streets of Houston. The more he drove the car, the more he fell in love with each mile clocked into the odometer. He soon began collecting different AE86 Corollas, and thus began his addiction.

This bay may not be “clean” but it’s super functional

Peck isn’t alone in his addictions. Like all AE86 car enthusiasts, he turned to many Japanese DVD’s such as Hot Version N2 races and he just knew that he would want a track 86 for himself one day. Unfortunately, the reality of building a custom track inspired AE86 Corolla, a car that is well over 30 years old, comes at a cost, and more importantly, time. Time and money is always a constant uphill struggle when you add an expecting child into the mix. Even still, Panichapong began to slowly collect rare track parts for his beloved chassis, with the hopes of one day completing his dream car.

As luck would have it, two years ago, Peck found an online listing in sunny California from an importer who had already imported the car you see before you through the 25 years and older exemption law. With only a few photos and a promise that the car ran and drove (barely), Panichapong took a major gamble on the Toyota and purchased it. The 86 needed some work, and Peck methodically planned out what parts he would need to make it perform like it once had on the Japanese circuit tracks. To restore this once great track star to it’s former glory, Peck had to fund it by selling most of his rare parts that he had collected over the past decade, a sacrifice that was needed to get it to where he wanted it.

Some people will probably point out that the car has “dated” technology and may even find that some of the modifications are hokey, but as Peck states, “I believe this car has been built for its purpose and all parts have been carefully picked by the Japanese builder.” He goes on to tell me that he is trying to only restore the Corolla to what it once was, and wants to keep the 86 ‘Period correct’. We absolutely love how period correct Peck’s AE86 is, and are super stoked to see something that we have only seen on dated DVD’s come to life before our very eyes in it’s 80’s/90’s glory.

Tomorrow is 8/6/14, aka 8-6 day throughout the world. We, the unofficial ambassadors of rice, will be having a special AE86 gathering at our Ricer Wednesday event at our food truck, The Rice Box, located at 1638 Westheimer Road, Houston, TX 77006 (Westheimer and Dunlavy) tomorrow night from 7p-11p to celebrate the Toyota Corolla AE86, and invite everyone to come check out this N2 Levin hatchback as well as a few other AE86 machines over a nice hot serving of General Tso’s chicken!
We’ll see you there!

So if any of you gearheads have watched Rush, the movie about the rivalry between James Hunt and Nikki Lauda, you may or may not have seen the two classic TA22 Celicas at the end of the final race. What intrigues me is not the fact that these Celicas were thrown in because it was a Japanese Grand Prix, but because they are either real immaculate JDM cars, or someone on that Movie set understood the importance of having authentic looking Japanese Celicas complete with “Smiley” bumpers and other JDM accents. Check out the screencap.

If you loved Senna, check out Rush!

I’m sure by now everyone and their momma has an opinion on the Subaru BRZ/Scion FR-S cars wether it be positive or negative. I generally tend to not give an opinion on any car until I actually drive one, but I have been looking for a new car replacement for quite some time now. Trying to find one of these cars in a manual transmission around Baltimore has been a task to say the least, luckily, JJ over at IAG Performance lent me the keys to their brand new BRZ for me to test drive. Damn, the front end of these BRZ's are pretty nice. That's not my hairy arm, I promise END_OF_DOCUMENT_TOKEN_TO_BE_REPLACED

Taken by Khiem at this past All-Team Bash 4, this Fancy red Lexus LS was sitting pretty along with the other Refined Elegance folk. You can’t tell in the picture, but it was about 104 degrees outside, and when you add in the wind chill factor, it comes out to be about 112 degrees. Texas is hot, but still not hotter than the cars, so remember that. As usual, click on the photo below to get your fix for your overly enormous screens.

If you’re one of the 5,400 fans on our Facebook Page, then you know we have inadvertently become known for the crazy pictures we post on there that we find by scouring the internet to bring you interesting automotive pictures you don’t see everyday. Of course, we actually do read every comment on everything we post, and we also listen to any suggestions that you guys may have for us.

That said, one of our fans, Adam Crellin, suggested we should post up some wallpapers on the site. Done! When we can, we will post up a MAX RES wallpaper of a photo that the MaydayGarage guys have taken. First up, Steve Nuss’ Toyota Supra Turbo. If you’d like to know more about this super nice Supra, make sure to check out his feature!! Any other suggestions? Drop us a line on our Facebook Page!