If you’re on any kind of social media (mainly Instagram), then you already know that Mayday Garage has been making it’s rounds throughout Japan with the help from our Japanese brothers (and sister!) at Car Shop GLOW. While we have a billion photos to show you of both Tokyo Auto Salon and Battle EVOME, we wanted to start off our Japan coverage with a small post about our visit today at ADVANCE. 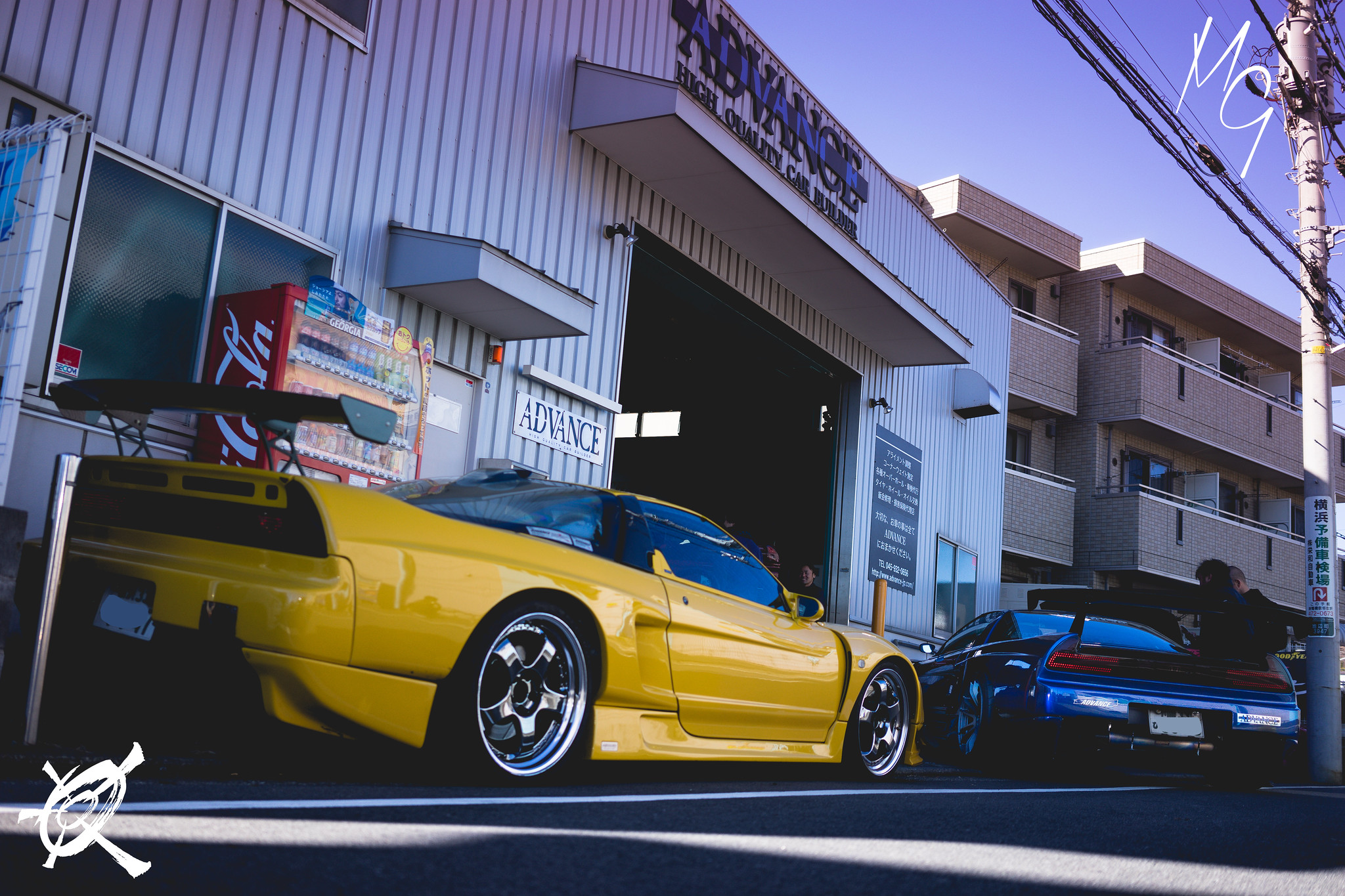 Before we begin, let me give you a little backstory on how we ended up here. We planned a trip to Japan once we were told by Ken Suzuki of CSG that they would be showing off Yukimitsu Hara’s now famous time attack FD RX-7, so the question we were asked by Ken was, “What shops would you like to visit?” For JohnP, it was only one shop; ADVANCE. Luckily, Ken knew of ADVANCE and spoke highly of them. So on JohnP’s last day in Japan, we made the trek to Yokohama prefecture where ADVANCE’s shop was located. 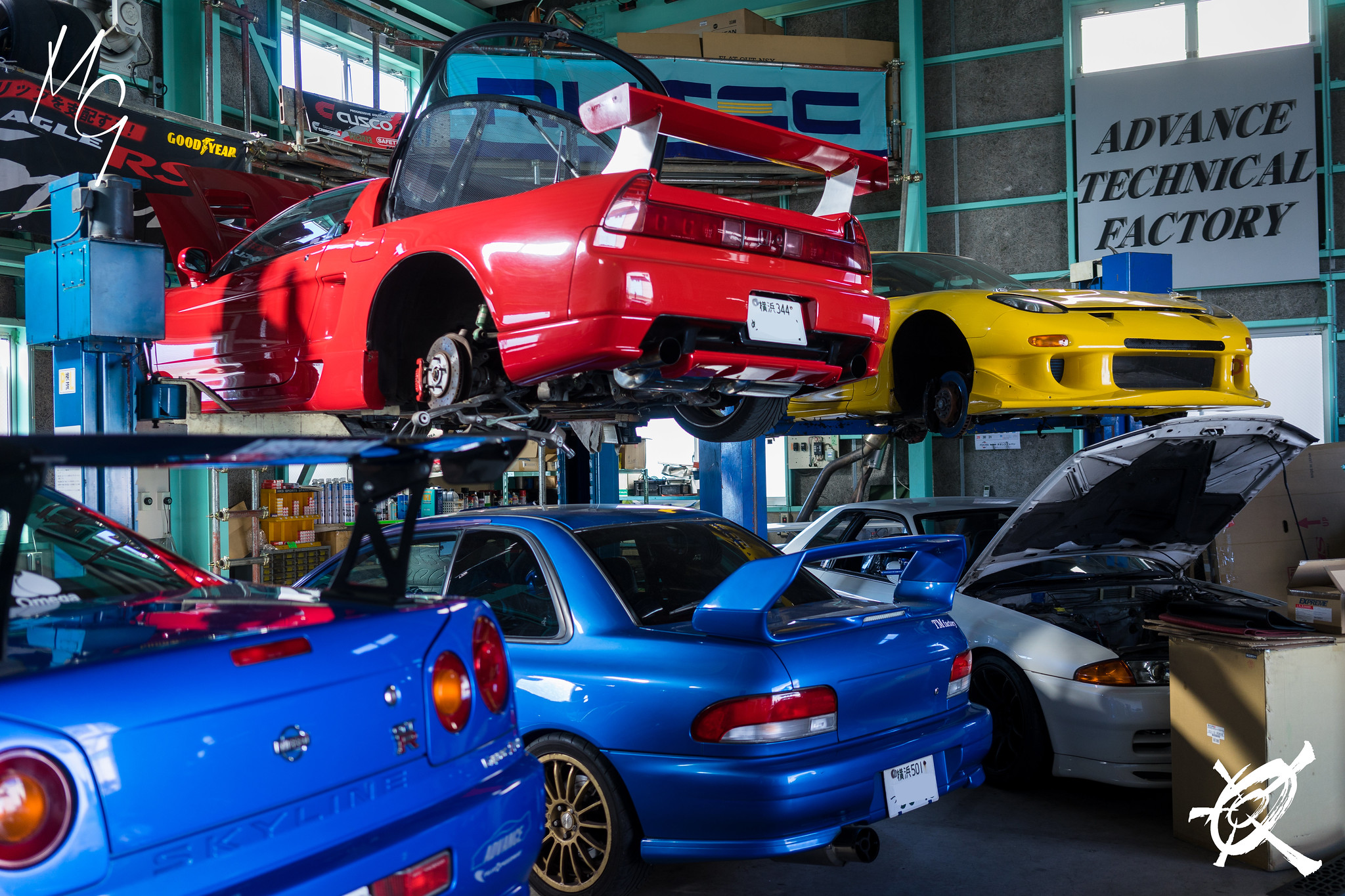 As soon as we made the turn from the main street, it was obvious we were in NSX heaven. Like skittles scattered across a table, we were greeted by a yellow, white and blue NSX parked in the street. ADVANCE, known worldwide for their specialty in tuning Honda’s MR chassis, has some of the sickest NSX’s on the planet, and the moment we rolled up to the shop, our jaws absolutely dropped to the floor. We were greeted by some of the employees including Masahiro Shinbori (IG name @masataro_nsx) who owns the ITB’d yellow NA2 on SSR SP1’s and a cup system. 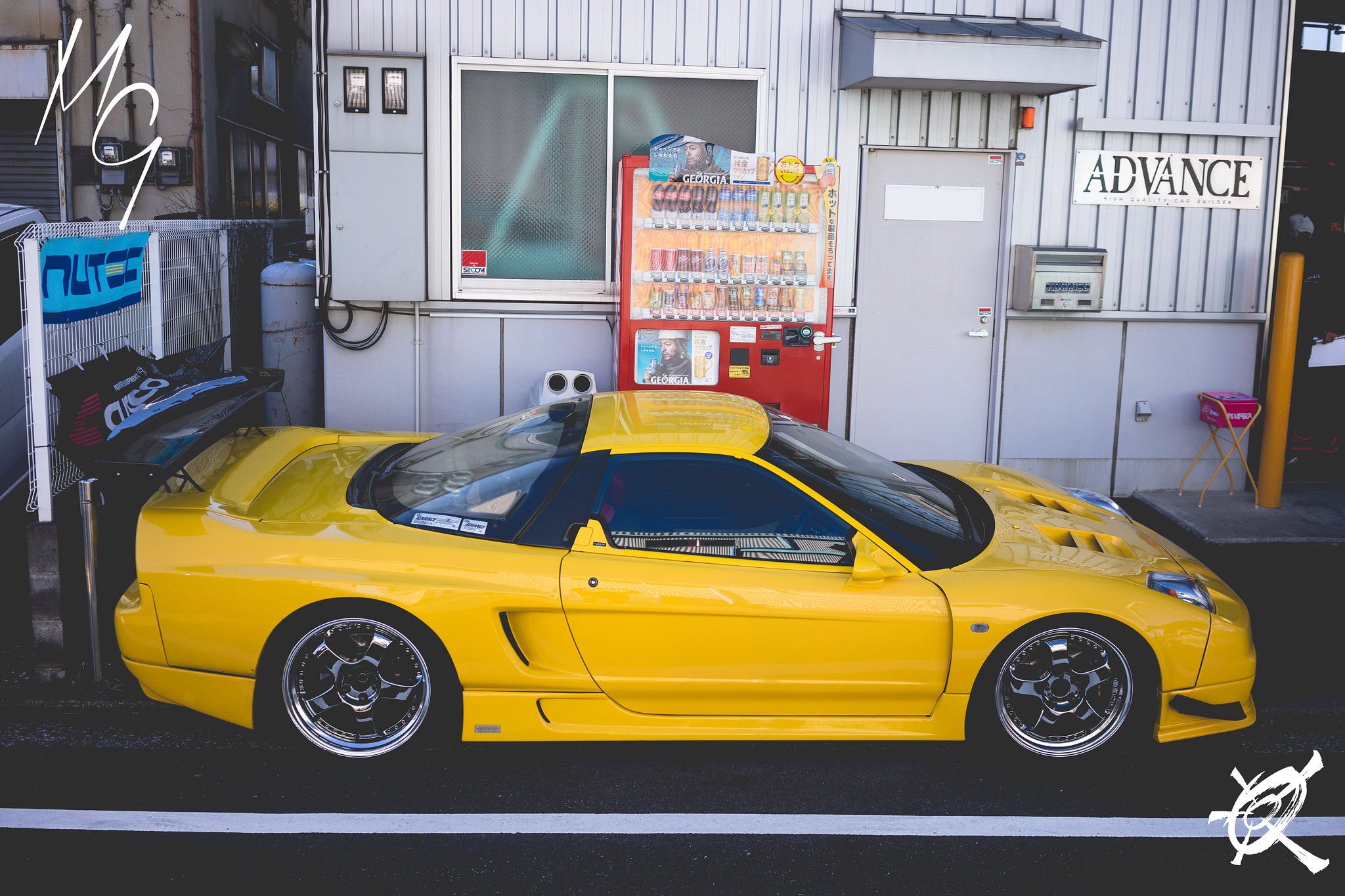 While Shinbori-San’s NSX would pretty much win any car show here in the states as is, it was the blue ADVANCE NSX (IG name @js_nsx) that we wanted to see. This NSX is what we consider to be an excellent example of Japan’s approach to the idea of “Total Tune”, that is, to make the car complete by working on every aspect of the car. The C30A V6 powerplant was stroked out to 3.1 litres thanks to it’s TODA Racing stroker kit complete with TODA Racing forged high comp pistons and cams and is tuned using a Japanese favorite HKS V-Pro engine management system. Using Fujitsubo exhaust manifolds, the car breathes easier via it’s ADVANCE titanium exhaust tucked neatly above the all carbon fiber rear diffuser. 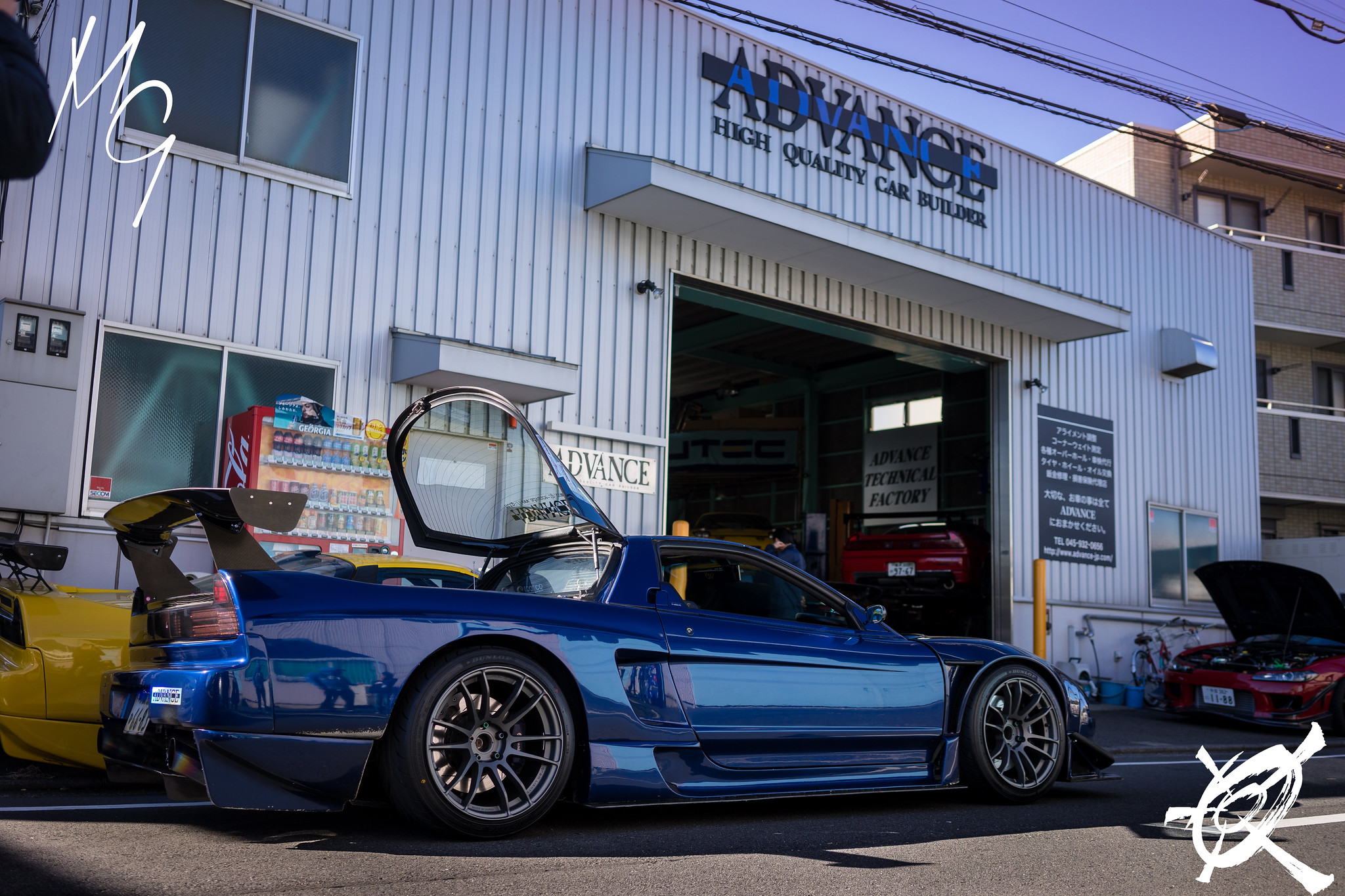 The NSX is seen on two different sets of wheels, for daily duties, the new RAYS GramLights 57 Extreme STD Spec adorns the NA1 in a standard 17/18 inch double staggered setup, and for Time Attack rounds, it uses the more popular RAYS Volk Racing TE37SL wheels in almost the same configuration, with the only real difference is in the tires. The ADVAN A050’s help in track attack and work great with the ADVANCE Bilstein E12 dampers on Eibach springs that let this Honda propel itself around the Tsukuba Circuit in only 1 minute and 1 second. Not bad for a street car. 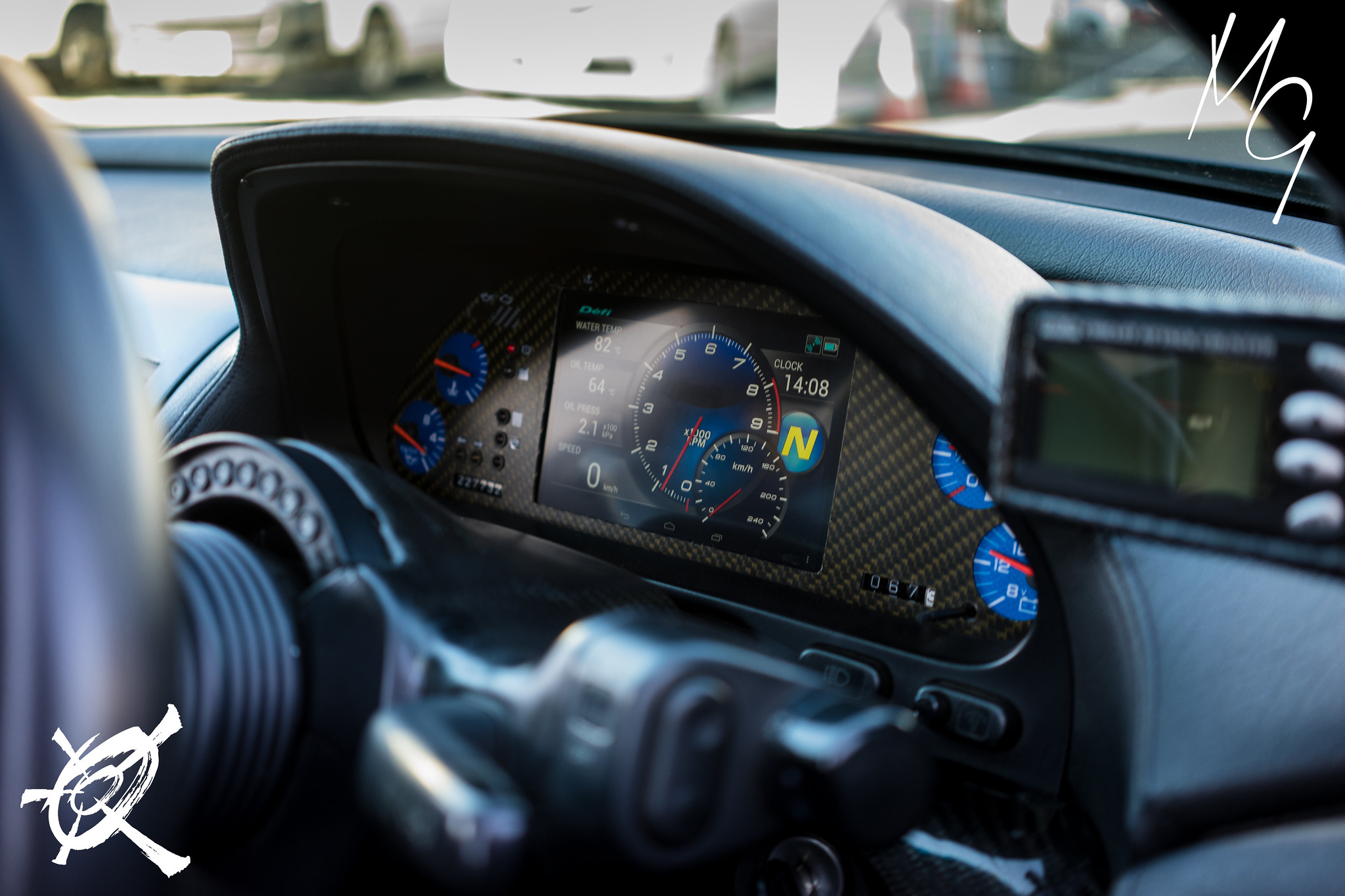 But what really gets our blood pumping is the exterior of the ADVANCE NSX. The Marga Hills wide body aero kit combined with the giant carbon fiber GT wing screams, “Look at me. Look how sexy I am, and now I’m going to beat your ass around the track”. The small touches on the car is what separates this NSX from the rest including the custom ADVANCE louvered hood complete with the matching CF hood diffusers, LED tails and other various carbon fiber one off bits. Another nice touch was the inclusion of a Nexus 7 Android tablet customer built into the gauge cluster along with a Defi smart meter. 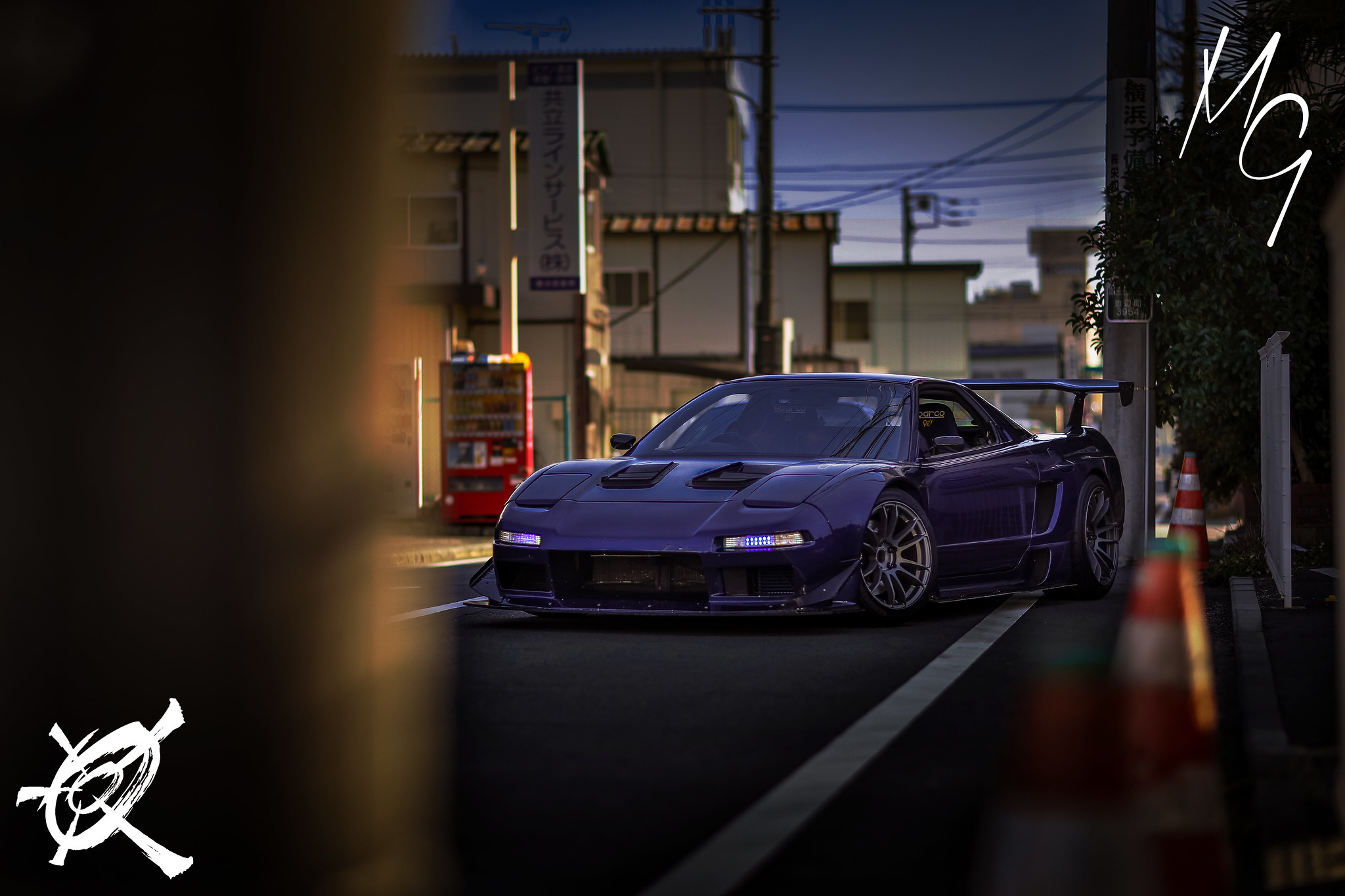 JohnP had the opportunity to catch a short ride in the blue NSX and was all smiles both before and after getting out of the car. It seems that this visit on his last day in Japan assured him that this would not be his last trip to the land of the rising sun thanks to the beautiful NSXs at ADVANCE. 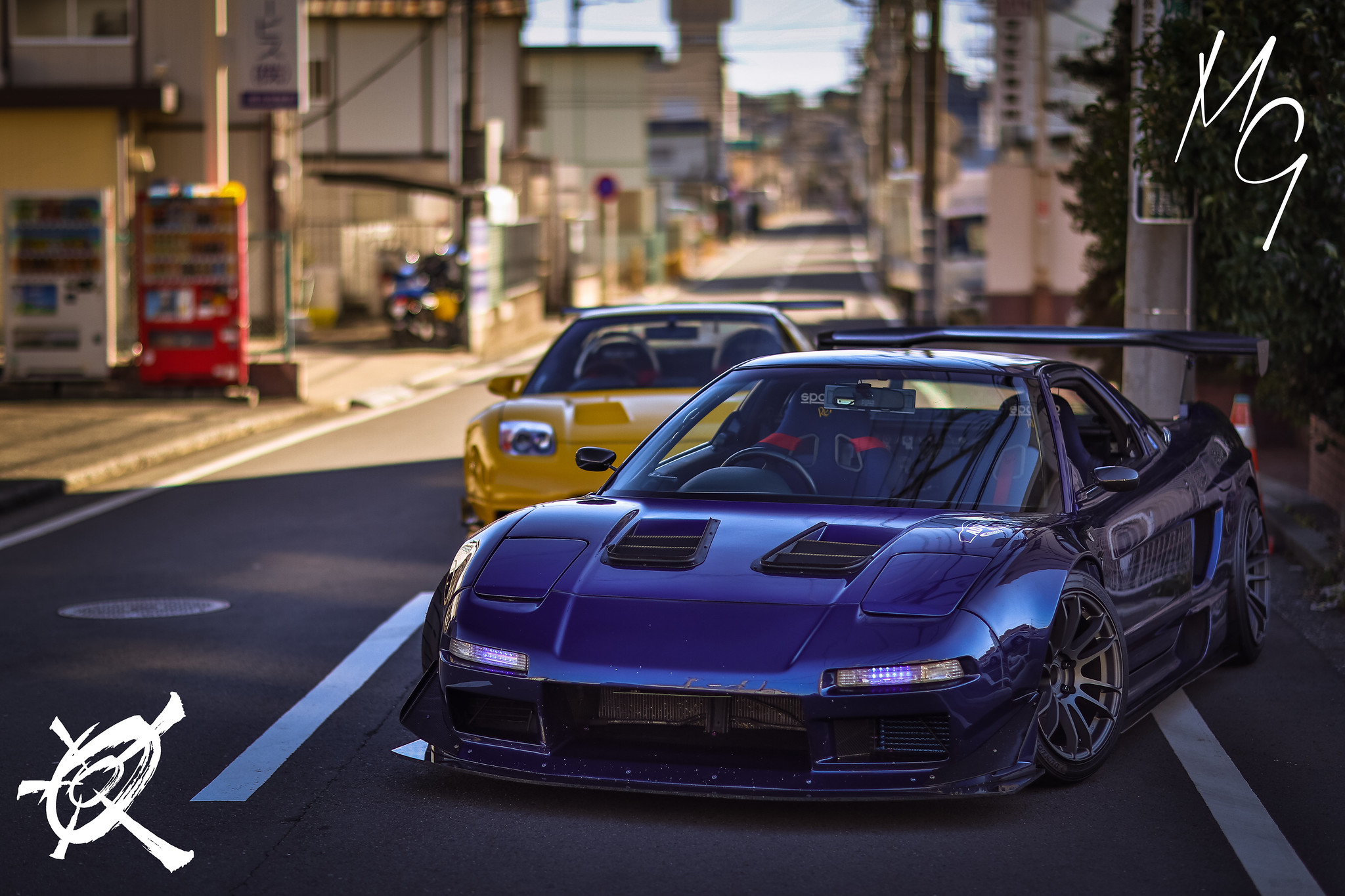